Valtice (Feldsberg) has been proud of the title “the nation´s capital of wine.“ The region involves such a number of vine-yards that they would cover the area of eight hundred football stadiums. Unfortunately, the town history has been involved in less positive events tied to Napoleonic wars, too. Domestic and foreign soldiers were passing through it and local population was burdened with financial and foodstuff requisitions. 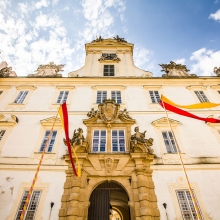 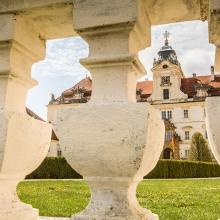 In December 1798 the Russian units, led by Commander Suvorov, were passing through Valtice heading for Italy. In those days Russia, together with Austria and Great Britain were members of the Second Coalition. Suvorov was a very talented general and Russian Tzar Pavel (Paul) sent him to help the Austrians. After crossing the Alps, the Russo-Austrian Army was successful in their fights against the French for several times. Later, however some disputes broke out between the Allies. Even though Suvorov was promised to have the utmost authority, very strict instructions concerning further course were coming from Vienna. Due to insufficient support on the Austrian side, the Russians decided to withdraw from the Second Coalition in October 1799.

Napoleon and His Army Occupy One Third of Austria

After the defeat of the Austrian Army at Ulm in 1805, Napoleon invaded Moravia through Znojmo (Znaim) and Pohořelice (Pohrlitz) for the first time. When he won the Battle of Austerlitz, crowds of Austrian and Russian captives were marching through the town of Valtice, soon followed by typhoid plague. Up till January 8, 1806 - there were more than 11,000 men and 5,000 horses - thus increasing the town population five times.

War events returned back to Valtice a couple of years after the Battle of the Three Emperors. In connection with the Battle of Znojmo (in July 1809), parts of Marshal Davout´s Corps occupied the town and nobody would have expected then they would stay there for four long months until the “Treaty of Vienna“ was signed. Austria proposed armistice again when the Battle of Znojmo was almost over and Napoleon agreed under one condition: “My troops will occupy one third of Austria as long as the peace treaty is signed.“ And so it happened. Napoleon´s army occupied Znojmo and Brno Counties including Mikulov in Moravia and northern part of Lower Austria including Valtice. (Yes, indeed – Valtice had constituted part of Austria during the whole period of Medieval Times and the New Age. Valtice was annexed to Czechoslovakia as late as after the World War I, based on the “Treaty of Saint-Germain,“ in 1919). The four-month occupation of Napoleon´s troops meant a complete disaster for local population – due to high financial and foodstuff burdens lots of people were thrown to absolute poverty.

That part of town history tied to wine has been much more joyful. Grapevine has been cultivated in Valtice for more than two thousand years. The Liechtensteins, who little by little turned Valtice into a magnificient residence of their family, were also very talented in grapevine cultivation. At the end of 14th century, Valtice was acquired by Johann I of Liechtenstein, a hofmeister (a specific medieval position at Court) of the Duke of Austria (namesake of Johann I Joseph, Prince of Liechtenstein famous of the Battle of Austerlitz) and ever since the estate of Valtice had been in possession of the Family up to 20th century and since 1560 also their family residence. The Liechtensteins were taking good care of the town and supervising its development and progress. Their very exceptional Chateau has often been denoted to as “Versailles of Moravia“ (as it was in case of the Chateau in Vyškov). The main starircase view, in front of the Chateau looks like the one in Versailles.

As early as in 1858, Johann II of Liechtenstein organized the very first wine exhibition in the Riding Hall of the Castle. Enthusiastic visitors were tasting delicious wines from about two thousand bottles and high-spirited guests were singing and laughing all over the premises. All of them regretted the only thing that they could not have taken the wine home. To do so, was possible only half a century later when the first wine fair was organized in Valtice. The tradition has been going on ever since and if you come to Valtice in spring there is a wonderful opportunity for you to participate in wine-tasting. It may be an unforgettable event for you to taste excellent awarded wines in the Salon of the Wines of the Czech Republic (a wine-tasting display of the annual selection of 100 best wines from the Czech Republic). It is possible to taste wines in the Chateau cellar dating from 15th century (one of the oldest and largest ones in Central Europe).

Both the Chateau and the Salon of the Wines belong to the TOP destinations of South Moravia. Valtice can also boast of the largest wine cellar of the type in the Czech Republic called “Křížový“ (Cross-shaped due to its ground-plan), where as many as one million litres of wine can be stored. The Valtice Underground, with its unique Labyrinth, has been accessible for visitors (a system of cellars modified as wine cellars) – and they can go through reconstructed and mutually interconnected historical wine cellars that are 710 metres long.

There are a lot more things to be seen in Valtice – unusual richness of nature and culture of the Lednice-Valtice Area with a number of Classicistic and Romantic-style buidings, ponds or water routes. Another place of interest is the Monastery of Merciful Brothers, established in 1664. It is a unique building - one of the oldest hospitals on the territory of the Czech Republic. In 18th century there was a famous surgery training centre there. After the Battle of the Three Emperors - the Monastery, the ground floor of the Chateau and the Franciscan Church were turned into temporary hospital for wounded soldiers. Members of the Merciful Brothers´ Order used to grow various herbs in their garden in Valtice. Its old tradtion has been bound with the contemporary herbal garden that has been situated on the place of the former gardening area nearby the Chateau.
Now they grow more than 300 species of plants there.
The Valtice surroundings are enchanting, too. Beauties of nature, splendid nooks have been in perfect harmony with magnificient buildings and other sights. The so called Colonnade (known as “Reistna“ - it is a reminiscent of the Gloriette at Schönbrunn in Vienna) undoubtedly dominates the space between Valtice and Lednice. The sight in the shape of a memorial arch with two side-wings and 24 Corinthian columns had been built by Johann I, Prince of Liechtenstein to commemorate his father – Francis Joseph I as well as his three younger brothers who died at their young ages. In the side-wings there are staircases leading to a terrace with unforgettable view all over the country.

Apart from wine-related events, there is a good chance to witness the so called “Napoleonic Days“ - the historical re-enactment events of the battles taking place in spring. The event takes place in the Chateau area and the park in Valtice and more than one hundred enthusiasts, wearing Napoleonic uniform replicas, take active part in it. The main purpose of the event is to acquaint spectators with the typical military environment on the turn of 18th and 19th centuries.