28 / First Day of the Battle of Znojmo

The village of Dobšice (Klein Tesswitz) has been closely tied to wine production for centuries and it is located just outside of Znojmo. There are many wine cellars there where you can taste local wines and experience true Moravian hospitality. A more obscure chapter of the village history is connected with the 1809 events when Dobšice almost completely burnt down. 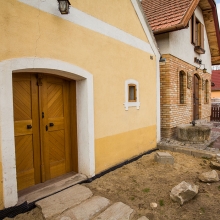 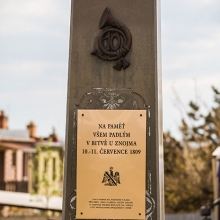 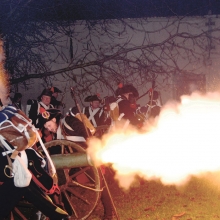 Count Rosenberg´s cover-up manoeuvre, that was supposed to misguide the enemy, failed. The French found out that the Austrian Imperial-Royal Army had been marching towards Znojmo. On July 9th, Archduke Charles was informed on the Austrian army having been located by the enemy and that Marmont´s Corps constituted a serious potential threat for them. He immediately ordered a quick retreat towards Znojmo. Most of the retreating corps including the baggage train (logistic support of the marching troops) reached Znojmo on July 10th, at 3 in the morning[11].

Most forces of Marshal Masséna´s 4th Corps were at least a day of swift march away. At this point, Mormont´s 11th Corps, composed of three infantry divisions, light cavalry as well as thirty cannons, constituted much more threat as they were progressing from Dyjákovice (Gross Tajax), only a few hours away from Znojmo. And the Austrians have not been complete, yet. Parts of the corps are still in the surrounding villages near Znojmo, with the rear columns still scattered on the territory of Lower Austria.

Ups and Downs of Both Parties

Marmont´s plan is to break through the left bank of the Dyje River as far as a stone bridge of Oblekovice (Oblas) on the south-eastern edge of Znojmo. He wanted to split the retreating army in two parts. Archduke Charles is well aware of this plan and posts 5 cavalry brigades and
12 cavalry regiments forming a defense line. They are to create a wide defensive curve and hold up Marmont until the last of the Imperial-Royal Corps pass through. In the afternoon Marmont’s Corps (app. 10, 000 men) arrive at the scene and he orders a full-scale attack on Dobšice and surrounding villages. This is how the two- day Battle of Znojmo begins.

The first day, heavy fights storm mainly at Dobšice. Twenty of the French cannons are deployed above the village. Rumble, dust and debris are everywhere as cannon balls fall on roofs of local houses. No wonder, they are soon on fire. The village changes hands several times that day. Finally, in the evening Marmont realizes that he is facing the complete Austrian Imperial-Royal Army - not only the rear units as he had suspected. Together with the nearby reinforcement, the Austrian army of 60, 000 men greatly out-numbers Marmont´s 10, 000 soldiers. He immediately sends his envoys to Napoleon who was anxiously awaiting the news about the enemy´s retreat in Wolkersdorf near Vienna. He was staying there since the Battle of Wagram. Another envoy has been sent in the direction where Marmont anticipated Masséna´s Corps were located.

Even though his situation was hopeless, Marmont finally managed to seize Dobšice. The 81st French Infantry Regiment fiercely attacked the village and chased out the Austrian Grenadiers. Přímětice (Brenditz), Kuchařovice (Kukrowitz) and Suchohrdly (Zuckerhandl) are still in hands of the Austrian army. Archduke Charles realizes that a coordinated retreat towards Moravské Budějovice is out of question that evening. The baggage train is progressing too slowly. He sends Bellard, the Commander of 1st Corps to Marmont hoping to arrange cease-fire. However, Marmont strictly declines, as he has already received the news that Masséna and his men are not too far away.

Archduke Charles relocates towards the village of Olbramkostel (Wolframitzkirchen) and issues orders for the following day. The troops begin to shift their posts and the manoeuvre continues until the following morning, causing occasional disorientation of the corps. Little did they know that, in the meantime, the enemy had increased in numbers. Napoleon had dispatched all his free troops. He arrived at Laa, together with his Imperial Guard, 2 Cuirrasier Regiments and 2nd Corps of Marshal Oudinot around 10 in the evening. Marshal Oudinot is a veteran of the Battle of Austerlitz and he is about to be joined by another one – Marshal Davout is approaching from Mikulov with his 3rd Corps and other troops. The first day of fighting is over. In order to gain access to Znojmo, Dobšice had to be seized.

In Dobšice, it is not unusual to smell gunpowder even today. Every year, in July the events of the battle are being re-enacted there with many soldiers participating in exact replicas of uniforms and weaponry (including cannons). There is live music and you can taste local wine production in wine cellars. However, if you like wine, you can come any time. There are three “wine alleys” in Dobšice with numerous beautifully decorated wine cellars offering good selection of high-quality wines. What a perfect way to spend a lazy afternoon! In the public wine cellar you can also admire pictures from the Battle of Znojmo re-enactment.