Day One: Southern Parts of the Battlefield
point in the map

6 / Across the Battlefield of Austerlitz 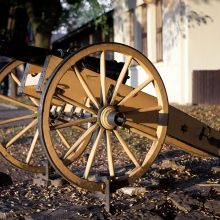 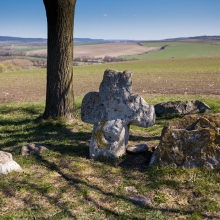 You should not avoid visiting the Chateau in Slavkov (Austerlitz) where the armistice after the Battle of Austerlitz had been signed between France and Austria, on December 6, 1805. Nowadays, there is a special exposition devoted to Napoleon. From Slavkov u Brna we head to Rousínov – if the local church is open it is worth going there. Its history is has been cloaked but you will find the relics of St. Valentine there. Passing through Viničné Šumice you will get to Kovalovice – a good place for refreshment in the local outdoor bio-swimming-pool in summer. It is a pure biotope – no chemicals at all and very low admission fare. The atmosphere of the place is wonderful, water is four-metre deep and due to its dark bedrock it keeps warm. Then stop in the village of Tvarožná – you will find a number of places commemorating the Battle of the Three Emperors – like a replica of a French cannon in front of the Municipal Office or the Santon Hill with a chapel where fierce fights went on. The yellow sign will lead you from Tvarožná to Šlapanice. You will pass by the Žuráň Hill where Napoleon had his outpost during the Battle of the Three Emperors. If you want to learn as much as possible regarding the Battle of Austerlitz – drop in the museum on the square. During the battle it was the head office of French Marshal Soult – you will find a commemorative board on the facade. There are trolley-buses, buses and trains going from Šlapanice to Brno.

Day One: Southern Parts of the Battlefield