29 / Battle of Znojmo and Another Victory

For most citizens of the Czech Republic, Znojmo is a synonym for delicious pickled cucumbers or wine that this town has been famous for. However, Napoleon assisted in shaping the town’s history as well. He stayed there in 1805 before the Battle of Austerlitz and four years later the town witnessed another of his triumphal victories at a battle that went to the history as the Battle of Znojmo (the Battle of Znaim). 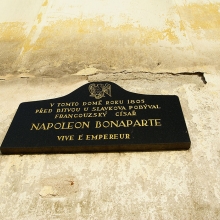 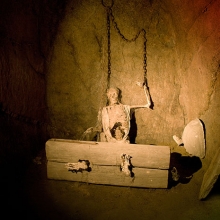 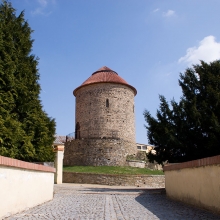 As for the total number of soldiers, the French army had a great numerical advantage over the enemy. However, French troops were scattered in the area and gradually re-grouped from various directions. The Austrian army was progressing in bulk and was able to strike more effectively at the beginning. On July 11th, the French army had app. 100, 000 men. However, due to the ongoing re-grouping, some of them did not even get a chance to participate in the fights[12]. Battalions of volunteers were fighting on the Austrian side as well. The so called “Landwehr” (home-defence) was established before the war in 1809. Soldiers (volunteers) were drafted whenever the country was at risk. The Znojmo county sent three battalions of Landwehr to protect the town in the Battle of Znojmo.

The battle went on for two days. On July 10th, heavy fighting took place mainly around the village of Dobšice. Nothing had been decided yet and rifle shooting and cannon fire announced that a new day was dawning. Marshal Masséna´s Corps arrived at the scene during the previous night. After a brief reconnaissance, Masséna decided to fight his ways across the river Dyje and capture the bridge in Oblekovice (today Oblekovice is part of Znojmo). Since the shooting had started at 8 in the morning, the bridge was captured by the French artillery and lost again two more times. Before 9 a. m. Marmont´s Bavarian Infantry Division was attacking the Austrians from its position near Dobšice and pushing them towards Znojmo.

Masséna´s men successfully captured the bridge. The Marshal himself was watching the events from the other side of the river. He could not directly participate in the battle as his leg had been wounded the day before. He was notably irritated by this and was yelling and screaming all around.

Capturing Loucký monastery (Louka Monastery) in Znojmo was definitely a good reason to
celebrate for the 18th French Infantry Regiment. Apart from the monastery itself, they seized the well-stocked wine cellars underneath. They immediately began to plunder them and before too long, they barely could stand straight. Their commander Legrand had a difficult time to force them to continue fighting. Well, history proves that whenever an army was progressing through a wine region, it had a negative impact on the fighting discipline and it substantially slowed down soldiers´ actual progress.

Around 10 in the morning, the French reinforcement together with the French Emperor himself appeared on the horizon of Dobšice. Napoleon immediately takes charge of the situation from his outpost between the villages of Dobšice and Suchohrdly.

In the afternoon the sky over Znojmo is clouded and soon it begins raining. The tired soldiers are immediately wet to the bone. Wet weather does not suit gunpowder, either. Rifles and muskets are not working properly, bayonets need to be used with partial success on both sides. The French are moving towards Znojmo but are quickly fought off all the way to Starý Šaldorf (Alt-Schallersdorf). The Imperial-Royal Cavalry, consisting mostly of Czechs, Moravians and Silesians, were considered best of the time and it gave them good credit in battlefields. The French are unable to fight their way through
in order to avoid the Austrian army from retreating towards Moravské Budějovice.

Archduke Charles is informed about the arrival of the 3rd Corps of Marshal Davout around 6 in the evening. Now it is absolutely clear that the enemy is stronger and has numerical advantage. Active resistance would have catastrophic consequences. The Archduke sends his Chief of Staff Wimpfen to Napoleon with an armistice offer and the French Emperor accepts it.

After the battle was over, the French Emperor accompanied by a part of his Guard set forth to the parish of Louka, where he visited the local Premonstratensian monastery. The monastery was founded in 1190 by Count Conrad Otto of Znojmo and his mother Maria. Long-term support of the major Czech royal dynasty the Přemyslids meant a lot of material possession and growing estates for the Monastery. It soon became one of the most important religious and commercial centres of South-Western Moravia. Its present, mostly Baroque, appearance is the outcome of 18th century reconstruction. Originally, there was a plan for the estate to cover a much larger area. This plan had been carried out only half-way through as the monastery was abolished in 1784 as part of Emperor Joseph II religious reforms. In the first half of 18th century, the world-famous inventor Prokop Diviš was a prior and later a priest in the monastery. Apart from his religious activities, he was very keen on scientific research, especially experiments based on electricity and its effects. He was, for example, the one who invented and built the first lightning conductor. After a short visit to the monastery, the French Emperor set forth to Vienna, this time avoiding Znojmo. He visited the town a few years earlier on his way to the battlefield of Slavkov (Austerlitz). That time he had stayed in burgher Schulze´s house. Today it bears the name Ugartův Palace (Ugart´s Palace). It is located on Horní Square (Upper Square) and there is a stylish Napoleon-look restaurant on the ground floor. A commemorative board on Ugart´s Palace facade reminds of Napoleon´s visit in town. According to historical records he and his entourage stayed just overnight and on November 19th, 1805 they left for Brno. The French came back after the Battle of the Three Emperors was over. They did not leave the impoverished town before January 1806.

Large Scale of Sights and Live Statues in Streets

Znojmo has definitely been worth visiting as there is a lot going on there. You should not miss visiting the late Baroque-style building - “Daunův Palace” (Daun Palace) - in the historical centre - a place where famous General Masséna lodged in 1809 during the occupation of the town (there is a commemorative plaque in the passage of the building).

Another sight definitely worth seeing is the Romanesque Rotunda of St. Catherine, the only remains of a castle used by the Přemyslid counts as well as the Znojmo Castle or Muzeum motorizmu ( the Classical Car Museum). The Gothic Church of St. Nicholas, the Town Hall View-tower or the Znojmo Underground, are among the town´s most distinguished landmarks.

A vast maze of connected passage-ways, the Znojmo Catacombs (Znojemské podzemí) is a 30 km-long and four-storey deep underground complex that belongs to the largest underground labyrinths in Europe. It also belongs to the TOP destinations in South Moravia. This unusual underground walk-about is even more exciting thanks to the exhibition called “the Mysterious Znojmo Catacombs.” Fairy-tale characters, an alchemist work-shop, grim dungeons and even “enlivened” stone rocks are to be seen here. If it is too hot outside, you can cool down in the local outdoor swimming-pool by the Loucký Monastery.

A tourist train connects all the major sights in Znojmo. If you come here in summer, there is a good chance that you will run into Napoleon or the famous composer and violinist Vivaldi strolling in the streets of Znojmo as live statues. If you decide to walk around at night, it is likely that you will run into another historical character, the town´s “bellman” announcing 9 and 10 o´clock at night.