First written reference of Suchohrdly dates back as far as 13th century. Its unusual name (Suchohrdly is translated as “dry throat“) is allegedly of Slavic origin. According to historical sources, the village had been named after a typical feature of local people´s characters. They were supposedly very hard-working but they also enjoyed various festivities. This is why they were called “people with dry throats.“ Moreover, it is well known that local residents were almost solely wine-makers and excellent masters, too. They exported their wine that far as Vienna. Apart from farming, the village of Suchohrdly (then Zuckerhandel) is also famous for the historical events related to the Battle of Znojmo in 1809. The village had suffered a lot during that time. Napoleon himself, led the fight from the local oak tree situated on a hillock known as “Hájek.” And the armistice that ended the French-Bavarian-Austrian war had been sealed in a farmhouse in Suchohrdly. 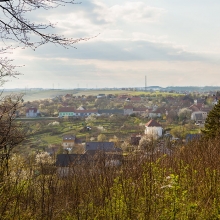 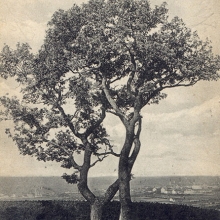 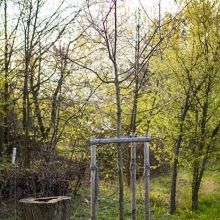 It is July 11th, 1809 - the second day of fightings that entered the history as the Battle of Znojmo. From the hillock in Suchohrdly, standing under a large oak tree, Napoleon commands all his available troops to move towards Přímětice (Brenditz) – a former village, nowadays a suburb of Znojmo. He orders a bypass of the Austrian left flank with the intention to gain control over the road leading to Moravské Budějovice and thus cutting the Austrians off from retreating towards the town of Jihlava. The Imperial Guard that accompanied Napoleon all his way from Vienna to Znojmo, remained close to his commanding post. You will not find the original oak tree of the battle in Suchohrdly any more, it did not survive. In 1931, however another oak tree had been planted on the spot of the former one. However, a fragment of the original “Napoleon´s Oak Tree” can be observed in the South-Moravian Museum in Znojmo.

The very last moments of the Battle of Znojmo are also tied to Suchohrdly. On July 11th, 1809 the French General Staff had its outpost in a farmhouse, known as “Červený dvůr,“ (the Red Yard). Marshal Berthier was the Chief of Staff. He was known to be one of the few, who were brave enough to deliver bad news to Napoleon and it is said he did so voluntarily. This time however, there was no bad news to be delivered, on the contrary - the Chief of the Austrian Staff, General Wimpfen, arrived in the afternoon. He was sent by Archduke Charles with an offer of armistice. Napoleon immediately called a meeting of his Marshals. It did not take too long to announce their decision. “We suggest to dismiss the armistice,“ they told unanimously. They were sure of their victory and wanted to crush their enemy, not to end the battle with an armistice. “Too much blood has been shed,“ uttered Napoleon and against his Marshals´ disapproval, he accepted the offer. And, indeed he was absolutely right - the fights claimed lives of more than 3,000 French soldiers and their Allies and more than 5,000 lives on the side of Francis I, the Emperor of Austria.

At 7:30 p.m. cease-fire was ordered by the French Emperor. Early morning on July 12th, 1809 the armistice was signed at “Červený dvůr,“ by Marshal Berthier, on behalf of Napoleon, and by Baron Wimpfen, representing the Austrian party. Nowadays, the farmhouse is still a private property and if you are interested to visit the place, you will find it not too far from the crossroad in direction towards the village of Kuchařovice. An info board, reminding of the historical events, can also be found there.

As soon as all the matters at “Červený dvůr“ were settled, French and Austrian Staff Officers rushed to the still fighting corps to announce cease-fire. However, it was largely ignored for some time and both sides continued fighting. French and Austrian Staff Officers were riding up and down the lines and had to wave white flags above their heads when entering the area. Despite their effort, it took them quite a while before they could separate the two enemy forces. On top of that they had to run away from bullets fired at them, more or less on purpose, by soldiers from both sides. You can imagine how physically and emotionally exhausting that task was for all of them.

The armistice of Znojmo had been signed for the period of one month with a 14-day notice period. For Austria, its conditions were very bitter, not very much different from those of the Battle of Austerlitz. The French wanted to annex the area of the whole Znojmo and Brno Counties. Austria had to give up large areas of its own territory what was confirmed by the “Schönbrunn Peace Treaty, ” in October 1809.

Battle of Znojmo Most Likely Should not Have Occurred

Following various historical sources, the Battle of Znojmo should not have occurred at all. The Prince of Liechtenstein was sent as a peace envoy to Napoleon by Emperor Francis I, as early as 7th July. However, his mission failed as the negotiator did not reach Napoleon. Commanders of the French corps refused to disclose the exact location of the French Emperor. Had the Prince of Liechtenstein found Napoleon, it is highly probable, that armistice would have been signed a few days earlier and the Battle of Znojmo would not have occurred at all. However, history cannot be modified. What can be done though is that you will come and visit the places in South Moravia that have witnessed these historical events.

When visiting Suchohrdly, make sure you stop by the local bell-tower called “Zvonička” after you climb up the hill where the famous oak tree used to grow. It is a cultural monument that was built in 1829, and a famous “Zvon svobody“ (Liberty Bell) can be found inside. It was named after the Slavic missionaries Constantine and Methodius (they influenced the cultural development of the Slavs and were thus called “Apostles to the Slavs”). For additional information on what to visit in Suchohrdly and its surroundings, you can stop at the tourist info centre that is located in the so called “Havranův dům” (Raven’s House). After the World War II, the house was given to the partisan leader - Indra Bohuslav - his covername was “the Raven,” thus the name. Nowadays, a local library is situated in the building. There is also a hostel and a wine cellar for rent. There are various exhibitions and other events to be organized there.