17 / First and Last Shots of the Battle in Telnice

The village of Telnice (Telnitz) turned to become the focus place of tough fights on 2nd December, 1805. The Allies intended to bypass the right flank of the French Army but they did not consider the French would disclose their tactics and that they would be well-prepared for the assault. The village had changed occupants for several times during the Battle of the Three Emperors. 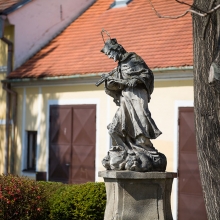 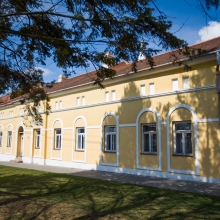 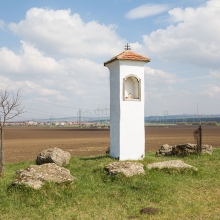 The first shots echoed in Telnice at night of December 1st, during gun-fights between Austrian hussars and French soldiers[2]. They ceased for some time and shootings started again between two to three in the morning. The Austrian Corps under the command of Lieutenant Field Marshal Michael von Kienmayer wrested the village from the French units of Marshal Legrand. However, they lost it to a counter-attack, and the French managed to sustain their positions even though Kienmayer´s borderers tried to recapture it. The Austrians suffered heavy losses in men and had to retreat even though they were partially successful in breaking the French lines. Due to the night gun-fight Napoleon bacame aware of the fact that the Allied troops extended further southwards then he had supposed and as a result he made final alterations in his plan. He sent a courier to Marshal Davout with a message to move towards Sokolnice (Sokolnitz) instead of Tuřany (Turas). In his final version, the French Emperor counted on Kobylnice – Telnice (Kobelnitz -Telnitz) defence line and he was well aware the French troops in the south would be in minority compared to the Allies. He hoped to keep them busy in order to accomplish his “lion´s leap,“ i.e. to occupy Pratecké návrší and attack the Allies from the rear. At about seven in the morning, the Russians under Lieutenant General Dochturov joined the fight - 1,600 French soldiers and four cannons[14] had already been ready to oppose them. Although the French had to retreat from the village, they managed to re-organize their units at the place called Zlatý potok. They were assisted by a brigade from Marshal Davout´s Corps who arrived at about nine thirty and it resulted in increasing the number of French soldiers up to 12,000 men including 2,500 dragoons in the area Kobylnice – Telnice. Nevertheless, the numerical advantage of the Allies was still more than three times as big as theirs[15].

The French continued in counter-attacking the occupied village and in one bayonet attack they were able to chase the Russians out of Telnice. Lieutenant General Dochturov organized his infantry for a counter-attack and the French made hasty preparations for their defence by fortifying against the Russians in local houses. In the meantime, there started an unwilling gun-fight between two units of the French army because of dense fog and cannon smoke. Dochturov immediately took advantage of the situation and recaptured the village. After ten in the morning, the fights calmed down. Later, the French retreated towards Otmarov (Ottmorau) and both Telnice and Sokolnice[15] remained in hands of the Russians. Nevertheless, Napoleon´s soldiers were able to fulfil the order and keep a larger part of the Allied Army busy for quite a long time.

Misery and Suffering of Local People

Local people were those who suffered most of direct clashes. That day the parish in Telnice occurred right in the middle of the battlefield. “Cannon balls were flying through windows and there was a terrible mess everywhere. All of us present were cringing in the dining hall corner. Thank God, nobody was injured,” as described in the local priest´s notes. As soon as the battle was over, the French garrisoned in Telnice and they started organizing burial of dead bodies, although the burial act itself was performed by local peasants. According to the parish chronicle - more than 140 dead bodies rest in peace in mass graves there. The French confiscated all bread, meat and other foodstuff from local people. “They confiscated two horses, four cows, one calf,
16 hogs, 44 buckets of wine, more than 12,000 litres of oats and many other things,” as stated in the local chronicle. It is said the local priest was deprived of everything but a coat, shirt and a pair of leather boots.

Telnice has been situated about 14 km south-east of Brno. The war miseries of the village and its surroundings have been commemorated by several Columns of the Crucifixion there. It is believed that one of them, in Růžová Street (Rose Street), stands on a place of a mass grave. Another one has been erected about 100 m off the road towards Újezd at a former field path in the place called “Odměrka.“ The first shots of the Battle of Austerlitz started exactly at these places. Napoleon also stopped here twice. First, it was on December 3rd, when accompanied by his marshals, he was observing the spot of his triumph. Second, it was on September 15th, 1809 when the French troops returned to Moravia again. Due to a Hungarian initiative, another memorial on soldiers´ heroism has been erected in the village. A carved memorial made of wood “kopjafa“ especially commemorates all those who died here and had been recruited into the Austrian army from the lands of the former Hungarian Monarchy. Dominating over the village is the Baroque-style Kostel sv. Jána Křtitele (Church of St. John the Baptist) - its foundations were laid as late as in 12th century and it had been re-built for several times. The 18th century-Baroque-style redesign had been executed under the leadership of an outstanding Moravian architect František Antonín Grimm, who was responsible for some other works, e.g. the re-buiding of the neighbouring Sokolnice Castle or the Castle in Napajedla (Napajedl) in the County of Zlín (Zlínský kraj). F. A. Grimm together with his father are buried in the Capuchin Tomb in Brno.

Telnice is attractive for all who are fond of active relax – there is a Brno Wine Trail and some bike trails, too. The surroundings of the village have been noted for some very special species of plants.