It is a magnificient Baroque-style castle and it is one of the TOP destinations to be visited in South Moravia. It is dominating over the town of Slavkov (Austerlitz) by Brno. It is famous due to the legendary battle of December 2nd, 1805 that was named after then Austerlitz (now Slavkov) – “the Battle of Austerlitz.“ The Chateau enchanted all the Three Emperors who were lodged there. You may not know, however, that it has been linked to some other historical personalities, first of all the outstanding Moravian dynasty of the Kaunitz (Kounic) Family. 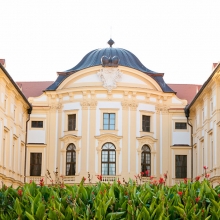 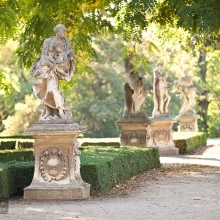 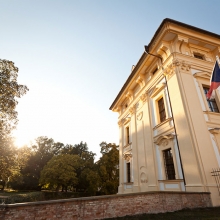 The Castle history goes back to 13th century when there was a commendam of the Order of German Knights. The Order was founded as early as in 1190 on the territory of the former Kingdom of Jerusalem and it was one of the graetest and mightiest Christian Knight Orders of the Medieval Age. At the beginning of 15th century, however, the Order fell into debts and it lost its former influence. In about 1509, the Slavkov estate together with surrounding villages had been purchased by the Kaunitz Family. It was Oldřich of Kaunitz who had a Rennaisance-style Castle built on the place of the older foundations. And it was the same family that initiated the Baroque-style reconstruction of the Castle.

The Slavkov Castle had hosted valued guests before the battle started. Two of the Three Emperors were dwelling there – the Emperor of Austria Francis I and the Russian Tzar Alexander I. And the Chateau did not remain abandoned even when the battle was over. Napoleon had his headquarters transferred there. The reasons for doing so were practical and prestigeous – when the Austrian envoy Johann I, Prince of Liechtenstein had reached him early morning on December 3rd on the place called Stará pošta with the offer of capitulations, he mentioned, by the way, the fact that both the Emperors were dwelling in the Castle. “Another good reason to do so,“ said Napoleon to himself and decided to transfer to the magnificient building with all his entourage.

What to Call the Memorable Battle?

Napoleon put aside his sword and reached for a pen to devote some time to diplomatic affairs. One of his first concerns was what to call the currently completed battle[14]. Napoleon was thinking what name should be given to the battle that was taking the area of 120 square kilometres at places called Prace, Tvarožná, Telnice, Šlapanice and many other villages. “So many names? It is impossible. It must be something special - an extraordinary name,“ this is what Napoleon might have thought. After a while he probably called out: “Yes, I´ve got it.“ In spite of the fact that the battlefield was situated more ahead of Brno, the Emperor named it after the place where he and his staff were dwelling – “Bataille d´Austerlitz“, i.e. the Battle of Slavkov (Austerlitz). In the evening Napoleon addressed his troops with proclamation from the balcony of the Chateau and he finished his speech as follows:

“Soldiers,
When I have completed everything,
that is necessary for ensuring the happiness and prosperity of our fatherland,
I will lead you back home to France.
There you will be treated to my most kind and generous care. My nation will welcome you with open arms.
It will be enough to say:
I fought at Austerlitz,
in order for everyone to rejoin:
This is a hero!

Where Was Armistice Treaty Signed?

The Slavkov Castle was not only the place of significant statesmen´s lodging but also that of important historic events. Even though the armistice conditions had been agreed upon by Napoleon and Francis, the Emperor of Austria at the place called “Spálený mlýn“ (The Burnt Mill), they signed the Treaty in the Slavkov Castle two days later – on December 6th, in the premises of the contemporary Hall of History. Neither of the Emperors participated in the solemn act. On the Austrian side it was Johann I, Prince of Liechtenstein and on the side of the French it was Marshal Louis-Alexandre Berthier who signed the Armistice Treaty. When he looked at all those present, Berthier could see faces full of expectations. With an expression of happiness in his face, he reached for the pen and signed it. The Treaty had fatal consequences, as it confirmed the demarcation line, thus dividing the territories for the French and Austrian armies in Moravia and the rest of lands of the monarchy. It also ordered the Russian army to withdraw from the territory of Austrian monarchy, namely Moravia and Hungary within fifteen days.

Napoleon´s Bed is Missing, Some Other Treasures are Not

The Chateau and its marvellous garden can be admired in the same way as during Napoleon´s stay. During the sightseeing it is so easy to imagine those days. It is believed that you can observe the bed Napoleon spent some nights in. This, however is not true – the exhibit-bed has been composed of a number of various parts from 18th and 19th centuries. Some of its wooden components come from other facilities, e.g. from a pulpit. The Emperor was provided with an absolute luxury in the Chateau, but in general, Napoleon was not dependant on too much comfort. For example, during his stay on Žuráň Hill, he spent a couple of hours lying in a provisional hut that had been built by his miners. It was his typical lifestyle – he was working a lot and sleeping very little, only a couple of hours a day. And when there was a battle ahead, he rather preferred his plank bed.

When you stay in the Chateau you can visit some of historic or artistic exhibitions that take place there. Not only school pupils are to be attracted by the Chateau underground space or the exposition devoted to Napoleon on the first floor and in the basement where visitors have been guided through Napoleonic war periods with focus on the 1805 military events. On the first floor there are not only models of soldiers and that of Napoleon himself but also a number of original historic documents – mostly weapons, uniforms and military equipments. The basement space provides a visitor with the opportunity to get acquainted with the pre-battle atmosphere (soldiers situated in lying positions), the particular battles (French cavalry attack on Russian infantry) but also with hard after-battle times (field first-aid station). Part of the exposition has been devoted to modern battle reconstruction recalls. And, yes, it is allowed to touch Napoleonic weapon replicas.

The Napoleonic war period has been regularly recalled due to a special action under the name “The Napoleonic Days“ that take place regularly in the middle of August on the particular Saturday that falls closest to Napoleon´s birthday (August 15th). The Slavkov Castle has been known for organizing a number of concerts here, too. There is a wide choice for those who are interested – popular, folk and classical music concerts. The most renowned among all of them has probably been the Classical Music Festival – Concentus Moraviae, involving 13 Moriavian towns.