History of the village located app. 10 km from Mikulov, on the left bank of the Dyje (Thaya) River, is at least as interesting as the origin of its name. The original German name “Dürnholz“ means “dry wood.“ It describes the area quite well, as Drnholec is among the driest locations in Moravia. This might be very well true, but the place is definitely not “dry” of historical events. There are also some historical sites like the local castle, Renaissance Town Hall or the Church of the Holy Trinity to name just a few. There is also a connection to Napoleon, whose troops invaded the village before and after the Battle of Znojmo (the Battle of Znaim) in 1809. 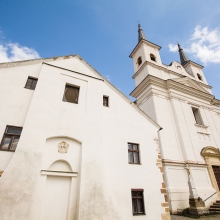 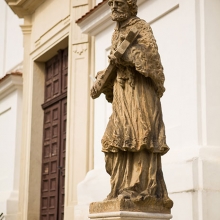 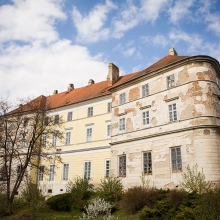 You have already learnt that after the Battle of Austerlitz the cease-fire between the Austrians and the French did not last long. Only four years later, they were fighting again. At first, the Austrians, led by Archduke Charles Ludwig of Austria, were successful at home. They won the Battle of Aspern-Essling, but were defeated at Wagram afterwards. Archduke Charles was a courageous leader and he was the first one to actually defeat Napoleon in a battle - a good reason for him to enter the history. In spite of the defeat at Wagram (July 5th - 6th, 1809) the Austrian army was able to continue fighting. It did not lack supplies nor weaponry or other military equipment. The Austrians retreated to Moravia as they did a few years ago but not that far as Brno - and they had not even intended to. Charles wanted to form his troops in Bohemia. He wanted to march there through Znojmo, Moravské Budějovice (Mährisch Budweis) and Jihlava (Iglau).

All the Austrian corps but one are progressing on the road to Znojmo and Hollabrun. Only Count Rosenberg, a native of the Austrian Graz, has another task. He was supposed to misguide the French, thus enabling a smooth retreat of the Austrian army. The 4th Corps led by Rosenberg moved towards the Austrian village of Laa and the Moravian village of Mušov (Muschau). At first, the French army followed and misinterpreted the enemy´s course of retreat[11]. Napoleon orders the Corps of Marshal Marmont and Marshal Masséna to follow the Austrians. They were supposed to locate the enemy and find out which direction they were retreating. Napoleon would then dispatch their main forces in that direction.

You might find interesting that Marmont was promoted to become a marshal after the Battle of Wagram. He was a well-educated man and a brave soldier, lacking the ability of strategic thinking though. Masséna, on the other hand, had no formal education. Nevertheless, he was able to make it from a non-commissioned officer to a post of marshal in 10 years. He had excellent military flair and abilities, but was also known to be rather greedy as money concerned.

Rear columns of Rosenberg´s 4th Corps were formed by Lieutenant Field Marshal Radetzky´s division who were prepared to counter-attack the French. Radetzky was an aristocrat of Czech origin. He studied at the Knight Academy in Brno - a training school for young noblemen, future officials and diplomats - where they received their general higher education. His military career was long and successful and he became one of the most respected military commanders of 19th century. There is a legend that his outstanding military career was predicted by an old gypsy woman, when he was 18 years old. She also told him he would not die in a battlefield. And, indeed, it happened as predicted. Radetzky died at the age of 91 - he slipped on freshly waxed floor of his Milan residence. He fractured his femoral neck and died due to complications that followed the injury.
Let us return to the events that are about to happen around Znojmo. Radetzky´s rear division managed to misguide the patrols of Marmont´s 11th Corps, pretending that the Austrian army was retreating towards Brno. A number of minor clashes occurred between the French and the Austrians as they were bumping into each other. Radetzky´s infantry fortified itself against the French at Drnholec and the village witnessed
fierce fights.

The fact that both armies clashed at Znojmo was a result of coincidence combined with some previous events. Due to one cavalry mission that failed, the French had discovered where the Austrian army was heading after all. The Austrian Count Rosenberg sent some of his cavalry to explore the area around the village of Dyjákovice (Tajax), located to the west of Drnholec, on the road half-way to Znojmo. French patrols followed them and they advanced more westwards than they intended, thus discovering the main Austrian Corps retreating towards Znojmo.

Marshal Marmont immediately sends a courier to the French Head Staff, sets forth for Dyjákovice where he will stay in the local castle (July 9th). The operation, however was not that smooth as described. It was rather tough for him to organize his Corps - as they were passing through the wine region most of his soldiers got drunk so much that their marching became a disorganized crawl. Local people had to put up with French soldiers even after the Battle of Znojmo was over. Four of the French regiments set up a military camp on the Layerberg Hill, near the village. All the villages in their vicinity had to supply them with oats and wine. On top of this, the French had free access to drinks in local pubs. Costs of their three-month stay mounted to millions in today´s currency. They drank as many as 170,000 litres of wine!

If you visit Drnholec today, you will notice the castle silhouette on the skyline as you approach the village. On its place there used to stand a 13th century medieval castle. Later, the whole area (since 14th century) belonged to the Liechtenstein Family until it was purchased by Christopher of Tiefenbach, 200 years later. Apart from the Renaissance castle, we recommend you to visit the local parish. It is one of the oldest buildings, dating back to the Gothic period when the village was founded. And do not miss the Church of the Holy Trinity with an impressive pipe organ dating back to the first half of 18th century. Kilometre-long vine-yards surrounding the area are very impressive and, of course, you can taste the local wine production, too. If you come here in summer, you can cool down in “Nové mlýny” (New Mills) water reservoir. It actually consists of three water reservoirs on the Dyje River – bordering the nature park Pálava.