Even though you would not expect anything special about the village of Prace (Pratze) located in South Moravia, it is just the opposite way round. Its very unusual name would prompt that this is not just an ordinary place. It is believed the name was derived from the word “wash“ (in Czech – “prát“). There used to be a sheep shelter and a woolen mill at the river-side. The original word “prát“ (wash) had been corrupted to the present name Prace. The village had a significant meaning for Napoleon, too - it become the symbol of his glorious victory. The hill has been famous also for the Peace Monument having been erected in the memory of all the Battle of Austerlitz victims. 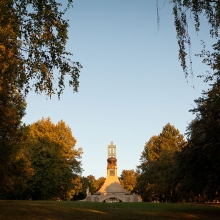 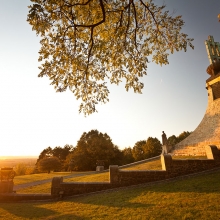 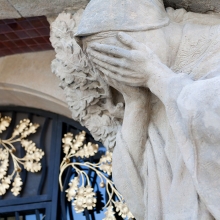 We have already mentioned Napoleon was able to win the battle due to his military flair and good portion of blessing. And it was just the ridge of Pratecké Height having been occupied by the Allied troops that played a crucial role in it. The Emperor of France abandoned the strategic position on Pratecké výšiny and his intention was to lure the Allies out to the Zlatý potok valley and fake the French army was on retreat. And so it happened. As early as at seven in the morning, thousands of Russian soldiers were descending to the valley. More than an hour later, the last - fourth column of soldiers has set out for descent. The delay, as mentioned above, had been caused by the last minute plan shift on the side of the Allies. Afterwards, Napoleon is ready to fulfil his plans and gives a sign to start the attack. He intends to occupy the Height and attack the Allies from the rear. There is fast advance of Saint-Hilaire and Vandamme´s attacking formations from Soult´s Corps towards the Height. Frozen lumps of clay crumble under their feet. The soldiers are almost running – their pace is about 120 steps per minute. The French remain cloaked by fog for a long time. As soon as they emerged, they were not more than 700 hundred metres from the top. Only as late as then they had been noticed by the Allied troops of Kolowrat´s division. One of the aides headed to General Kutuzov with the news. Kutuzov, though in shock, did not panic. His intention was to defend the hill at all costs. He ordered the Austrians under the command of Kolowrat to make it as short as possible to the top. Then he sent the Russian part of the column across Staré vinohrady to re-siege the village of Prace, that had already been occupied by the French.

In spite of the unexpected situation the Allies were able to organize their defence fast and the French were met with a tough resistance and their attack was not as simple as Napoleon intended[14]. They started a two-hour desperate fight that cost heavy toll of both sides. Toughness of Russian soldiers was especially extraordinary and it had been mentioned in memoirs by General Thiébault.

The French besieged the hill at about two in the afternoon. Nevertheless, the success of this particular attack was far from the final victory. Napoleon´s “lion´s leap“ was in fact dissolved in a series of merciless fights. Both sides were fighting proving extraordinary courage and enthusiasm and it was a drawn battle for a long time[14]. Finally, the victory was on the side of the French miltitary flair but the truth is - that day brought more blessing for the French.

Memorials have been erected not only to commemorate those who lost their lives in battles but also as an eternal reminder for next generations. And it exactly is the case of the Monument on the Pratecký Hill - to commemorate all soldiers who died at the Battle of Austerlitz. The Monument is very special – it is a 26-metre high pyramid-shape memorial topped with an ancient Slavic cross towering over the countryside. The reverent atmosphere of this place has perfectly been confirmed by the Prophet Isaiah´s words: “My fallen shall uprise again“ – that have been engraved above the chapel gate.
The Monument resulted from the initiative of priest Alois Slovák and it was designed by architect Josef Fanta. If you check the Monument in details you will observe four statues of shield-holders. The three of them are symbols of the three army fighters and the fourth one is the battlefield territory – Moravia. The Monument entrance has been lined with statues of lamenting mothers and wives and by ellipse-shaped inscription-bearing granite plates. You will certainly be attracted by the interior - there is a chapel with a marble-made altar and an ossuary below containing soldiers´ remains that were found in the former battlefield. The interior has also had some specifications, e.g. there is an extraordinary acoustics of the place – if you are in one corner of the chapel you will hear the other man whispering in the opposite one. Is it incredible, perhaps? Another good reason for you to visit the place. A story claims there is a miraculous stone on the floor of the Monument. In case you step on it and you think of something special, it will certainly come true. The only problem is, nobody has ever identified its exact position.

Multimedia Exposition - Experience Enjoyed by Everyone

Another place to explore in the surroundings is the museum of the monumental battle exposition. You will find there models of soldiers in contemporary uniforms, weapons or preserved objects from the battle but also a great number of various pictures, documents, video-recordings and books. The top experience, however is to watch the audio-visual multimedia programme in the middle of the exposition, where soldiers seem to be enlivened right in front of you. The museum is a favourite place for school excursions and, it is for sure, pupils are always excited about it. And you should not forget to take a family photo at a replica of an Austrian three-pound cannon that is placed on the museum terrace.

Every year the historical events are commemorated in a ceremony which takes place on the anniversary day of the battle at the beginning of December. In the area of the Peace Monument there is also a memorial devoted to Austrian General Jirčík - the only general of Czech origin who participated in the battle. Together with his soldiers of the infantry brigade he heroically defended Pratecké návrší.

The Peace Monument deserves to be included among TOP destinations to be visited in South Moravia. Each of the places being denoted to as TOP spots are to meet a number of criteria – these focus especially on quality of the services offerred. All tourist attractions being involved in the selected group are to be found on the web page www.vyletnicile.cz. May you choose any of them, you will certainly be well-contented.