The village of Jiříkovice (Girzikowitz) lies south-east of the Žuráň Hill, in the north it is bordered by the road to Olomouc. Due to a legend, the village was named after its founder, a certain man called Jiří (George). Even though Jiříkovice had not been involved in direct fights, its surroundings served as starting position for Soult´ s 4th Corps before their attack on Pratecké výšiny (Pratecké Heights). During the battle and also after it was over, too the village provided shelter for the wounded. A famous story - under the name “Fires of Jiříkovice“ - has been linked to the place. 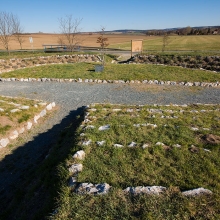 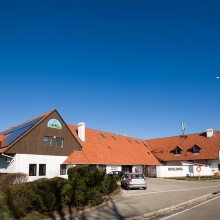 Flames for Emperor of France

On the eve before the battle Napoleon was checking the position of his troops. All of a sudden he stumbles – he may have stumbled over a tree root or a sleeping soldier´s leg - who knows? Somebody lights up a wisp of straw in order to light the Emperor´s way. Soon some others join him and hail the Emperor by lifting straw on their weapons. The forthcoming battle coincides with 1st anniversary of the Emperor´s coronation. Touched by this display, Napoleon will have frequently recalled it. The exceptionality of that moment as well as soldiers´ enthusiasm could have hardly been described. However, straw was burning fast and hiding inhabitants sadly watched how thatches from their houses and barns disappeared at the cold night. And it was not only this exceptional occasion when French soldiers, in order to keep themselves warm, were burning all they found – window frames, gates, and fallen trees, too. In the meantime, commanders have received details on the forthcoming battle. The Corps of Marshal Nicholas-Jean de Dieu Soult are to oppose the centre and left flank of the Allied army near the villages of Jiříkovice and Telnice (Telnitz). His father was a notary and Soult served in the army since he was 16 years old. His military career started to boost after the revolution, when Napoleon recognized his talent. During the Battle of Austerlitz he commanded the largest Army Corps involving three infantry and one cavalry divisions. Undoubtedly, he had not dissapointed his Emperor.

What a Spectacular View

There is a wonderful view point - the road in the north of the village leading from Tvarožná to Jiříkovice. You can observe the Roketnice Stream valley – the place around Žuráň – the French Grenadier Division was concentrated there. Farther eastwards, there is the place called “Staré vinohrady.“ Northwards, behind Žuráň, in location called “Loučky“ was the cavalry reserve of Prince Murat. Murat was a son of an inn-keeper and his father wanted him to become a clergyman. Instead of that, however, he was recruited into the army and his career in the royal cavalry sky-rocketed. His position was definitely sealed by his marriage with the Emperor´s sister Caroline. He was a very enthusiastic man, courageous, sometimes a little big-mouthed. He was well aware of his prestigeous position and he liked to show off his wealth. On the other side, he was renowned for well organized drilling of Napoleonic cavalry.

Emperor of France and His Battle Plan

Napoleon worked out his plan in details. He enabled the Allied army to take favourable defensive positions on Pratecké výšiny (Pratecké Heights) and Staré Vinohrady (Old Vine-yards). He counted on the fact that the Alliance would attack the French in the locality of Zlatý potok valley and they would descend to the stream where they might have expected the core of the French army. The French left flank would turn southwards and attack the right side of the Allied army and would push them towards 3rd Army Corps of Marshal Davout. In the meantime, Davout would advance from Rajhrad to Sokolnice (Sokolnitz) and form a barrier against the Allied columns descending from the Heights.

Napoleon was absolutely right concerning his rivals´ intentions and his opening gambit proved his military skills. Nevertheless, his plans partially failed – Davout´s Corps had reached their positions after a long and exhausting march from Vienna and they were rather weakened. Their arrival was crucial in determining the success of the French plan. Athough with enormous difficulties, they fulfilled their task and had not allowed the Russian and Austrian units to attack the French rear positions. The decisive moment for the further progress of the battle was the fact that the Allies decided to attack farther in the south than Napoleon had expected. Therefore the Allies had to re-organize their deployments. This “operation“ had lasted for longer time than it was good for them – the infantry columns stumbled over each other and in the process they ran into cavalry columns of Johann I, Prince of Liechtenstien that slowned them down even more. The delay caused that Marshal Soult had to fight to reach Pratecký kopec (Hill). Davout had enough time to strengthen the Zlatý potok defense and beat off the Allies in the area between Telnice and Sokolnice - the Allies´ original area for decisive assault.

Rohlenka Was not Named after Cornet Roll

A road-side inn named “Rohlenka“ (“rohlík“ in Czech is a cornet-shape roll in English), used to stand on the northern side of Jiříkovice near the road to Olomouc. It might have been named after one of its original renters called “Rohlena“ or due to its position in “the corner“ (in Czech “roh“) of the field. The most probable, however is the fact that it got its name from a bulge in Jiříkovice area where the inn had been built, as local people called this place “Rohel.“ “Rohlenka“ has been running ever since – you can find a motor-way restaurant here (during its reconstruction in the middle of 90s of the last century, they discovered a mass grave there and it supports the theory that there had been a field hospital in 1805).

In the nearby village of Ponětovice (Puntowitz) - south-west of Jiříkovice, there used to be a temporary aid station. It is believed that the way to the field hospital in Šlapanice was red of wounded soldiers´ blood. If you come to visit this place in summer time you can stay at Ponětovický rybník (pond) – situated in a picturesque valley between the villages of Jiříkovice and Ponětovice.