When contemporary citizens of Brno stroll through the place called “Zelný trh“ (the Vegetable Market) and head for the theatre or they just do some vegetable shopping, they hardly think of this particular place and its history. “Zelňák,“ as they call it, has been a marketplace of various commodities for almost 800 years. In the times of the Battle of Austerlitz, however, the market had witnessed a lot of blood on its cobble stone pavements. The surrounding buildings lodged outstanding personalities and some of them served  as capture places. 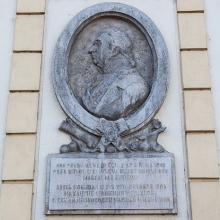 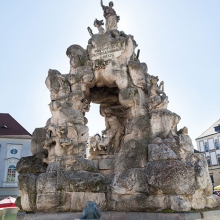 Just before the Battle of Austerlitz (December 2nd, 1805), part of the retreating Russian army was passing by the city of Brno and headed further towards Vyškov (Wischau). It was only the Commander-in-Chief of the Allied troops General Kutuzov and his staff who spent a night in Ditrichštejnský palác (Dietrichstein Palace) on the Vegetable Market. This Russian general had been in the army since he was sixteen years old. He had a perfect memory, good command of words and he was believed to be as cunning as a fox. He proved his qualities, e.g. in the Russian-Turkish wars, where, however, he had suffered serious injuries and lost one of his eyes.

A white memorial board on the facade of the Dietrichstein Palace is to commemorate the Russian general. Just a few steps farther, in No.2 Dominikánska Street (Dominican Street), a memorial board recalls another defeated personality from the Battle of Austerlitz, namely Francis of Habsburg. It is worth mentioning that in fact, he was both Emperor Francis I and II as well. In 1792 he was enthroned as the Emperor of the Holy Roman Empire of the German nation (the empire included both lands of Austria and Bohemia) and held the name of Francis II. In the same year he became the King of Bohemia and the King of Hungary. In 1804 he was crowned as the Emperor Francis I of Austria. When the Holy Roman Empire was dissolved in 1806, he was deprived of the title of the Roman Emperor keeping his title of the Emperor of Austria Francis I, the King of Bohemia and the King of Hungary.

Due to his Decree – “Moravské zemské muzeum” (Moravian Land Museum) could have been established, then known as Francis´ Museum – a significant act for the city of Brno. The very core of the contemporary Moravian Museum has been composed of Dietrichstein Palace on the Vegetable Market. Thanks to the exhibition “Extinct Life in Moravia,” you have a good opportunity to experience a trip back to the Palaeozoic Era and explore the major Moravian fossils in the same way as the young boys did in the film “The WayBack to Primeval Ages” (characters from a very popular Czech science fiction film for children). Further on you can admire a number of various archaeological excavations from the territory of Moravia or a collection of minerals as well.

After General Kutuzov had left and Brno was besieged by Napoleon´s troops the palace provided accommodation for French Marshal Lannes. However, there was no exciting view out of his windows. In those days the Vegetable Market turned into a huge bloody and stinky slaughterhouse. The city of Brno was obliged to provide the French with 26,000 pounds of meat daily, i.e. about 23 cows. The peasants from the surroundings carried the cattle there and the French slaughtered them right in the middle of the market. Sanitary standards of those days were rather poor and as a result there was an enormous smell of cattle waste.

Another outstanding building of the Vegetable Market – the Reduta Theatre – added to significant role in the history of the city. The Reduta Theatre is the oldest theatre building in Central Europe. After the Battle of Austerlitz, the French kept Russian prisoners of war there and later it became a hospital for wounded soldiers. Those who were unable to be transferred to Brno, remained in field hospitals close to Austerlitz battlefield, e.g. in the villages of Šlapanice (Schlappanitz) or Ponětovice (Puntowitz). General Thiébault, heavily wounded, was one of those having been transferred to Brno. His wounds were very severe, he suffered from inner organ lesions and as many as seven fractures. He had almost zero chance to survive. Anticipating his close decease, Napoleon delivered a funeral oration on his behalf: “What a magnificient way to pass away.“ Thanks to doctors´ extraordinary care, however, the General survived. Kajetán Unterweeger, the Printer House caretaker in Orlí Street (Eagle Street) where the General spent his convalescence period, was probably the only one who was not really happy about it. “The General has his own surgeon, butler, cook, three servants, fourteen horses and eight entourage men. He occupies six rooms, all of them have to be heated. God help me. I have no idea what else I am to settle and deliver,“ he complained.

The Reduta Theatre interior had been seriously damaged by exploiting it for military purposes. The theatre renter – Mayer - went bankrupt and left Brno in 1807. Nowadays, Reduta is a part of the National Theatre. It bridges over tradition with modern theatre, history and the present. It offers first stage performances of drama, opera and ballet in the Czech Republic. It is also a venue of regular exhibitions, concerts and lectures.

“Parnas,“ the Baroque-style fountain is situated as a dominant of the Vegetable Market and it silently confirms the former French army´s presence in the city. There is a rocky cliff growing out of the central fountain and you can spot the mythic hero Héracles in its lower part. He is holding a club in his hand and with his other one he is drawing Cerberos – the Underworld watchdog´s chain. Another interesting sight for tourists is “Brněnské podzemí“ (the Brno Underground). One of its parts is located right below the Vegetable Market. If you decide to explore it, descend 212 stairs and there, 6-8 metres below the square surface, you will spot a historic wine cellar, an alchemist workshop, food storing samples or even some torturing tools. The next part of the Brno Undeground network includes “Mincmistrovský sklep“ (Mintmaster´s Cellar) located below Dominikánské Square (Dominican Square). The city of Brno is in possession of the second largest ossuary in Europe underneath St. James´ Church on Jakubské Square (James Square).