The municipal park “Denisovy Sady” was established in 1804 and it has been merited to the Moravian Governor Count Mitrovský. To commemorate the end of long-lasting war miseries an obelisk was erected in the park in 1818. It is a quadrangular pyramid with four gilded lions in each corner. The act of the opening ceremony might have been probably rather stressful for the Austrian Prince Ferdinand as it was his first public performance. The participant of the solemn act, the Duke of Opava and Count of Krnov Johann I Joseph, Prince of Liechtenstein, who commanded the Austrian-Russian cavalry during the Battle of Austerlitz, had certainly recalled some significant moments of the battle as well as his meeting with Napoleon in the place called “Stará pošta” (the Old Post Station). The Emperor of Austia Francis I delegated him as his envoy to surrender to Napoleon when the Allies were defeated. 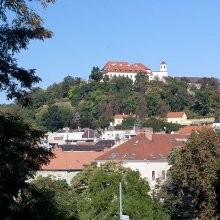 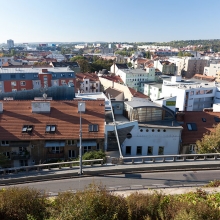 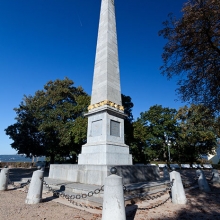 Originally, the park was named on behalf of the Emperor Francis I as “Franzensberg,” or less officially “Francl.” Later it was re-named after the French historian Ernest Denis who became famous for spreading Czech history abroad and who established a Czech library in Paris. Every year, on the turn of May and June the park is the place of the first fireworks shots within “Ignis Brunensis” - the fireworks competition festival.

During the Napoleonic campaigns, Brno went through hard times. After they had occupied the city, the French marshals and generals wanted to enjoy their stay there and they confiscated the most splendid palaces of local aristocracy. Soldiers were garrisoned in plain burgher houses and monasteries. There was not too much comfort for them, as there were about 20 - 25 soldiers per house. The original house-owners were deprived of all their rights – they often had to sleep on plain benches or even on the ground as there was no room left for them. Ground floor shelters were often turned into horse stables. These people were not only deprived of their dwellings, they also had to feed their “uninvited guests.“ And the city itself was burdened with heavy supplies - they were obliged to provide the French with – 5,000 pairs of boots and 26,000 pounds (about 11.8 tons) of meat, 20,000 loaves of bread and 14,000 portions of oats and hay daily. This was a typical way of acquiring food in foreign territories. The soldiers usually claimed from municipal and village deputies to provide them with an exact volume of stock. The costs were to be compensated by the defeated country. As times were tough, it was not easy for the Moravians to meet the orders. It was obvious that soldiers requisitioned everything they found, quite often with the assistance of local people, as some of them quite enjoyed the situation of disclosing hidden stocks.

As you know, during the battle the French started to transfer their wounded soldiers and captives to Brno. Little by little, their number mounted to thousands – some of them suffered from lacerated wounds, serious head injuries, others lost their limbs or eyes. A number of horses suffered because of leg injuries that prevented them from any movement. “We were totally shocked, we cried like babies,” the priest Horký recalls. Not only the wounded hit the city – a plague of typhoid fever spread very fast and caused other hundreds of people´s death. The plague was cut by first frost around Christmas time.

War reparations, defeated Austria was obliged to compensate to victorious France, were the last bitter drop for the Moravian-Silesian Lands. Brno was also obliged to compensate a significant portion of them. People fell in total despair: “No other city had suffered so much as Brno had during this war.” The toughest burden of the city was removed on 12th January, the day when the last French soldier had left the city.

Where from Is the Most Spectacular View upon Brno?

All the above mentioned miseries are forever to be commemorated by the Obelisk in Denis Gardens. The Obelisk itself was slightly damaged during a strong storm in May 1887, when its top was hit by lightning stroke that went down the western side leaving some split blockstones behind. Even though later they were replaced, some smaller cracks have survived until present days. The park is not only a place to recall history, people come here for entertainment and relax. When strolling through reconstructed city walls, you may run across a musician playing his accordion or dancers, e.g. salsa dance instructors. The high spot experience, however is the most romantic view upon the city from there. You can see places like the Špilberk Castle, Mendlovo Square (Mendel´s Square) with Augustinian Monastery and Basilica of the Assumption of Our Lady. The square was named after the famous genetist Johann Gregor Mendel, the abbott of the ancient Augustinian Monastery, who experimented with peas plants that brought forth two generalizations which later became known as Mendel´s Laws of Inheritance. Mendel turned to experimenting with honey-bees to extend his work to animals. He was so fascinated by honey-bees that he had the plain Špilberk slopes planted for supporting their activities. Mendel’s work was rejected at first, and was not widely accepted until after he died. In 1900, however, his work was “re-discovered” by European scientists. Not only biologists but anyone interested can go through Mendel´s greenhouse where he used to experiment. It is placed in the abbacy garden in the Old Brno district – the place where Mendel´s Museum has been located as well.

Another spot among the renowned sights of Brno placed not far from Denis Gardens has been familiar with all citizens of the Czech Republic - or at least they have passed through it during an act of payment – the Cathedral of St. Peter and Paul has been depicted on the Czech ten-crown coin. This dominant is certainly worth visiting - its 84-metre high towers were designed by the architect August Kirstein. Though built in Gothic style, both towers are Neo-Gothic and its interior has prevailingly been in Baroque style.