The Špilberk Castle, known also as the Prison of Nations, was believed to be the heaviest prison of the Habsburg monarchy. It is the place where most dangerous criminals were imprisoned, although a great number of them were political prisoners. When built (in the second half of 13th century), Špilberk was the royal castle of Czech Kings and the seat of Moravian Margraves. Since 17th century, the castle was turned into an uncoquerrable fortress. Its underground casemates and dungeons served as a fearful prison. It became the place of grim, lengthy suffering for French revolutionaries, Italian carbonari as well as Czech political prisoners. Among those who were imprisoned there are Franz Trenck, a soldier and one of the most controversial persons of the period, the Italian writer and dramatist Silvio Pellico or Václav Babinský, a Czech outlaw. Even such a military expert as Napoleon must have been pleased by the fact that the fortress was not to be conquerred. Another good news for Napoleon was that the fortress defenders left behind about 3,000 cents of gun powder, 60 cannons, 6,000 rifles, a number of uniforms, boots and foodstuff[1]. His high spirits, however were soured when he received the one-month old details on the lost sea-battle near Trafalgar. “I cannot be everywhere,“ he declared with grinding teeth and it encouraged him even more to prove the Allies his strength on land. 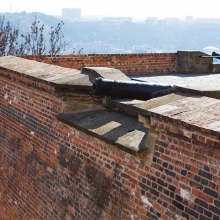 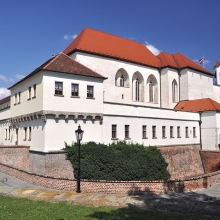 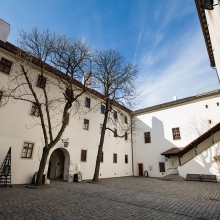 Devilish Plan or How to Get Rid of Napoleon

By the way, there might have been a chance to force the French march fast from Špilberk back to Paris with catastrophic news, may a certain Kristl from Bouzov (Busau), an apprentice at Mittermaier´s guild in Brno, have succeeded in validating his idea. “Napoleon is a damned man, he brought nothing else but bad luck and war to us. I will take my rifle and make it short,“ he said to his master. The apprentice had a plan to shoot Napoleon dead at the moment he would pass through Brněnská brána (Brno Gate) towards the Špilberk Castle. Even though his words were brave, in fact he failed to complete his intentions. Who knows what happened? Maybe, he was not really serious about it, maybe his rifle failed to shoot or it was his master who persuaded him not to do so. Anyway, Napoleon survived and he was crossing Europe in good health 16 more years and in 1809 he returned back to Brno again. It was in the period of Austrian defeats near Wagram and Znojmo. Under the cease-fire, the French army occupied a part of South Moravia including Špilberk.

This time Brno and its citizens were not inflicted so much as during the first occupation, however it had fatal consequences for the Špilberk Castle. When Napoleon examined it closely again, he had its walls demolished and ordered to land up the well as he did not want to leave such a strong fortress behind. Thus, Špilberk definitely lost its original military significance[49]. Since about the middle of 19th century, Špilberk had served as barracks for soldiers for more than a hundred years. Later the Špilberk prisoners suffered there two more times – those imprisoned of military but most of all of political reasons. First, it was during the World War I and second, a much more severe situation, during the first year of Nazi occupation of Czechoslovakia. A number of detained Czech patriots lost their lives there.

Špilberk is a place of interest even today. In its museum you can find seven permanent expositions devoted to the history of Brno, arts and architecture as well as a wide selection of short-time exhibitions. During summer months the Castle courtyard and other premises are venues for various culture events, concerts, theatre performaces or historic scenes. A visit to mysterious and obscure underground labyrinth of casemates may serve as a high spot event for the braves - even today it is a rather grim experience.

Another place to remind the Battle of the Three Emperors is the grave-stone commemorating General Valhubert – a French officer in the highest rank who lost his life in the battle. It is placed in “Tyršův sad” (Tyrš´ Garden) between Kounicova and Botanická Streets – not far from the Brno centre. Jean-Marie Mellon Roger-Valhubert, known as General Valhubert was in charge of defending the Santon Hill occupied by the French against Bagration´s Allied corps during the Battle of Austerlitz. He was deadly wounded somewhere there by a cannon ball or a shrapnel[10]. He passed away keeping his heroism until the very last moments – when his soldiers wanted to help him, he thundered at them: “Return to your positions, I will die here. It is useless to lose six more men because of me!“ He did not complain of his heavy wounds nor did he groan at all. He must have suffered a lot, nevertheless, he was able to dictate his last will: “Go and tell the Emperor that I would die within an hour. I wanted to achieve more ... I leave my family in his hands.“ Though objecting the soldiers transferred him to the field hospital in Šlapanice and later to Brno. In spite the utmost care the General passed away three days later.