The name “Rajhrad“ or rather “the Eden Castle“
(in Czech) was given by the ancient Slavs as late as in 8th century when they had built a fortified seat there. The Rajhrad hill-fort ceased to exist about one hundred years later. Thanks to its advantageous position on trading crossroads the name Rajhrad (Gross Raigern) had not been forgotten. The place turned into a natural trading centre and in 11th century a village was founded there. 200 years later it was big enough to achieve the privilege of organizing seven-day annual markets. Its long-lasting history has been confirmed by a number of significant cultural sights. Among the most frequently visited ones is the Benedictine Monastery that is the oldest monastery in Moravia. The whole complex has been under reconstruction for several years thus enabling a step by step opening of its premises to the general public. Its most attractive part to be visited is the place called “Památník písemnictví na Moravě“ (Museum of Literature in Moravia) that belongs to TOP places to be visited in South Moravia. 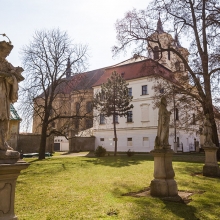 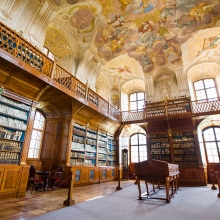 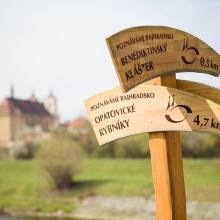 The complete history of Moravia has been introduced through written documents on a two-storey space. The interactive part of the exhibition will certainly attract your attention. If you open drawers you can explore book copies and some rare manuscripts, e.g. records of Prokop Diviš, the inventor of lightning conductor. Modern era has been represented by manuscripts of outstanding writers and politicians. The most impressive, however is the monasterial library with ceiling frescos and rich gilded stuccoed ornaments. Imagine ancient Benedictine monks in their long habits there, humble and incredibly patient in handwriting sacral books on vellum. The archives contain as many as 65,000 volumes of books.

Following the Rajhrad priest´s records we learn that concerning the Battle of the Three Emperors, local people had recognized first soldiers on 17th November. “That day there was a continuous flow of Austrian and Russian troops crossing Rajhrad and heading towards Brno and Tuřany. They were marching so hastily as if the French had been chasing after them,“ priest Petr Siedl wrote. And indeed, the French were approaching very fast. The retreating Russian troops intended to slow down the enemy´s march and not far from the monastery, they set fire to a new wooden bridge over the river “Svratka“ (Schwarzach) at night of 18th November. Threatening local people with death penalty, they forbade them to stop the fire. Next day the French reached Rajhrad – Marshal Murat and his corps were progressing on the imperial road. As soon as soldiers had come across the devastated bridge, they immediately ordered the local authorities to build a new one. People managed to buid it within one night[8].

Later, Marshal Davout and his 15,000 soldiers transferred from Vienna to Rajhrad. Davout reached Rajhrad the night before the battle – on December 1st. He housed in the monastery dining hall and was waiting for news about the rest of his units. Finally, Friant´s division of his corps arrived – they managed a 113 kilometre-long march from Vienna across Mikulov in 40 hours[8]. Davout was probaly the most competent of all Napoleon´s marshals. He graduated from the same military academy as the French Emperor. He was very clever and had a good flair to foresee his rivals´ intentions. No wonder Napoleon had originally planned a significant role for his unit in detaining the Allied army attack within the territory of Zlatý potok.

After the Battle of Austerlitz was over, several hundreds of Russian captives were held in the monasterial church. The Benedictine monastery gave shelter to a great number of casualties, too. “All the chambers echoed with laments of the wounded. We were unable to look at their suffering. To help them to relieve we poured them oil and wine,” the Rajhrad priest described the horrors of December 2nd, 1805. At the beginning monks were responsible for treatment, later substituted by military and civic health care personnel. All the wounded and ill persons remained in the monastery until the end of February, 1806. They say, some of them settled and set up families in Moravia. Due to it, a number of originally French surnames, like Bíza, Galet, Foret, Remeš or Šalé[16] can be found in regions of South Moravia. It should be admitted, however that these were exceptional cases. Due to the French law such soldiers were considered deserters. And from Austrians´ point of view they were looked upon as enemies. Concerning French-sounding names the explanation could be much simpler. Most of these names on the south-eastern territory of Moravia stem from earlier period than the Battle of Austerlitz. In about the middle of 18th century – the villages of Čejč, Krumvíř and Terezín in the Hodonín estate were flooded by tens of families coming from France. They were invited by the husband of the Empress Maria Theresa, Francis I Stephan, who was of French origin (Lorraine region). He wanted his nationals – colonists from France - to settle the abandoned villages in the South of Moravia. They, indeed settled in Čejč and its surroundings and their descendants have survived until today.

Contemporary Rajhrad is a relax area south of Brno, due to its location and good transport facilities. There is a good network of bike trails and hikers will enjoy the beautiful surroundings, famous for a number of orchards, gardens and vine-yards, too.