At the beginning of 19th century, Šlapanice was prevailingly an agricultural centre supplying Brno with bread and milk. In those days the population counted eight times less people than it is today. Even though its inhabitants were not directly involved in the battle itself, they were unable to avoid a number of troubles as all the three armies, one by one, were marching acrross their village. 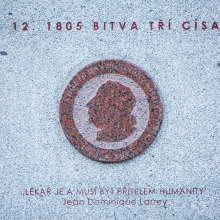 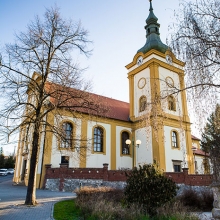 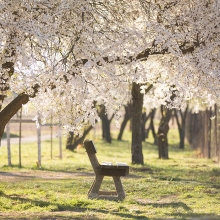 The Commander-in-Chief Kutuzov was the first one to arrive in Šlapanice on November 17th, 1805. Next day the General left for Rousínov (Rausnitz) and from there he headed for Olomouc where he was supposed to join the other Russian army of General Buxhöwden. On November 19th, 1805 – when the French occupied the whole territory south of Brno, Šlapanice sheltered the Allies´ General Staff. The same day, the Commander of Austrian-Russian cavalry, Johann I, Prince of Liechtenstein lodged in the local parish. As the only one out of all generals he would fight on his own land. Among others, he was also in possession of the Pozořice (Posoritz) estate. It was in 1805, after his elder brother had died, when he inherited all the estates in Moravia, Austria and Bohemia that belonged to his family. He was reluctant to leave his castle in Valtice but after the fall of Vienna, he was obliged to take over the command of the devastated imperial cavalry[14]. His units set camps on fields near Šlapanice. The village was full of Russian soldiers, too. They occupied all the streets, set out fire and cooked meals confiscated from local people. “They took two of my hogs I just planned to slaughter. They also confiscated all my chickens, hay, straw and wood,“ as recorded by the Šlapanice priest František Arnošt Franke in the local chronicle.

The Allied troops did not stay long in Šlapanice, they left the village at dawn the next day and they were retreating towards Vyškov. This, however, did not bring too much relief to local people. The leaving soldiers were very soon exchanged for the French. As soon as they appeared, they immediately required wine, money, clothes and boots.

On that crucial day of the Battle of Austerlitz, the village of Šlapanice occurred in the French rear and it provided them with ideal space for taking care of casualties as well as detained captives. After the battle was over, about 400 captured Russians were imprisoned in the local church. Military doctors could utilize two larger buildings in the village - the monasterial scholastery and the Blümegens´ Chateau – where they installed a field hospital and a surgical outpatient-station. The castle history goes back to 18th century when it belonged to the Moravian Land Hetman - Jindřich Kajetán Blümegen. Nowadays, there is a secondary school in its premises.

During the battle, however, the place was under the command of the Surgeon-in-Chief of the Imperial Guard, Jean Dominique Larrey, who introduced some completely new methods of medical treatment, e.g. providing immediate basic treatment. They organized the so called “flying ambulances” – mobile military hospitals on horse carriages. To elicit the situation – in those days heavily wounded soldiers were left helpless on battlefields for long hours. In spite of heavy wounds many times they tried to help themselves and get out of battlefields at all costs. Larrey and his subordinates were able to save tens of lives due to a well-organized system of first aid, although they lacked major medical devices. Those who were unable to be transferred remained in the castle hospital. In the morning, December 3rd, there were 190 of them.

In those days surgery was rather tough, including mostly limb amputations that were frequent even in cases when injuries were not complicated, just to prevent the wounded from more serious complications. Larrey and his colleagues were real experts in lobe amputations – they managed these operations within incredible two to four minutes. In those days, when general anaesthetic was unknown yet, speed was crucial for patients´ survival. To achieve anaesthetic impacts, doctor Larrey applied opium or he overcooled injuries. However, most frequently they gave schnapps to their patients to make them drunk. By mere coincidence, it was in 1805 when another anaesthetic – morphine - had been invented. Doctors´ efforts many times failed and they were frequently desperate not only with their wounded patients, but because of low sanitary standards contagious diseases spread among local people, too.

Thousands of soldiers who lost their lives in battlefields near Šlapanice have been commemorated by the Column of the Crucifixion built-in to a house facade in Jiříkovská Street, where victims from the castle hospital were buried. Their remains had later been laid in the local cemetery in Šlapanice and in 1965 a Cenotaph with engraved letter “N“ was erected there. Surgeon Larrey and his fellow-doctors were awarded with a special monument on their behalf placed on crossroads of Riegrova and Brněnská Streets (Rieger and Brno Streets) in 2005.

The Church of the Assumption of Our Lady is the landmark of Šlapanice where hundreds of Russian captives were held after the Battle of Austerlitz. The former premises of the scholastery house the Museum of Brno Region where we can find the testamentary fund of the prominent Czech landscapist Alois Kalvoda. Out of the other attractions - two restored horse-carriages from the turn of 19th and 20th centuries are worth seeing. Contemporary activities in the Museum include a number of short-term exhibitions often focusing on children.