The Žuráň Hill belongs to one out of many landmarks of the Three Emperors´ Battle. It is a slope partially piled up of earth and stones as long ago as the ancient times of nations´ migration. It is a silent witness of the 1805-year clash as well as a number of other historic events. 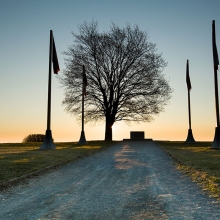 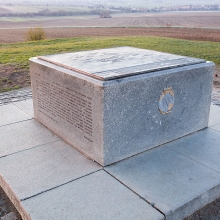 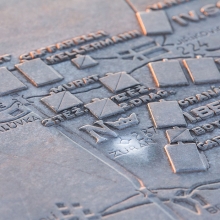 Do you find the name “Žuráň” rather strange ? Those of you who guess of its German origin are right. The word “Schurain” means, in fact, a boundary highland. The French call it the Emperor´s Hill or Napoleon´s Table as Napoleon Bonaparte situated his headquarters and led the first phase of the Battle of Austerlitz from there. The hill, that is located on the right-hand side of the northern edge of the battlefield, provided him with a wonderful view over most of the battlefield area from the Santon Hill over Tvarožná (Bozenitz) as far as Pratecké výšiny (the Pratzen Heights) occupied by the Allies and he was able to see as far as the upper flow of the stream called Zlatý potok. Napoleon was hoping that the Allies would start the attack and they would leave their advantageous position of Pratecké výšiny southwards to Zlatý potok valley. As soon as they would descend, Napoleon planned to attack their positions on Pratecké výšiny and invade them from the rear.

The Battle of the Three Emperors Bathing in Sun and Blood

Since the early morning of the day “D” Napoleon was providing his marshals with detailed instructions concerning the battle. Freezing soldiers hold their weapons firmly in their hands, ready for attacking the enemies. They are waiting for orders - they trust their Emperor and are full of expectations that this day would end their long journey and they would soon be on the way back home. At seven thirty the horizon on the east starts shining and cutting the mist, the red sun is rising over the hill behind Holubice (Holubitz). The beautiful view takes aback all, even Napoleon himself is puzzled for a while. This moment was so exceptional that the scarlet sun of Austerlitz became a legend.

The sun-rise and sun-set framed the beginning and end of the bloody fight. Victory for one party, defeat for the other one, death of several thousands of soldiers directly on the battlefield as well as disaster and misery of common people who were involved against their will. The sun had witnessed it all before it set in the evening. And it was the sun that supported Napoleon also by dissipating the mist over Pratecký vrch (the Pratzen Hill) and set light upon the Allied troops marching down the hill towards Telnice (Telnitz) and Sokolnice (Sokolnitz). His own troops – Soult´s 4th Corps headed by two divisions under the command of Generals Saint-Hilaire and Vandamme - were still cloaked by dense fog. It was eight in the morning when Napoleon raised his right hand and suddenly gave his units a clear signal: “Let us end this war with a stroke of thunder!” he shouted. What happened afterwards was like one sharp blow or “a lion´s leap” – a metaphor that became immortal.

Before the battle started, Napoleon pretended the weakness of his forces because he wanted the Allies to conclude he had planned to retreat. He intended to provoke them so that they would envelop his right flank and they would cut the retreat communication line to Vienna. The French Emperor had a plan that his soldiers would attack and recapture the Heights, then from the Heights they would launch a decisive assault to the centre of the Allied army, cripple them and then encircle them from the rear. French Marshal Davout, approaching Rajhrad was ordered to attack them in the area of Zlatý potok and chase them in-between his units and those French ones attacking from Pratecké výšiny to the valley. The Allied army was supposed to find itself in a clench with no chance to escape.
By “the lion´s leap” from Jiříkovice (Girzikowitz) towards Pratecké výšiny – the divisions under the command of Generals Saint-Hilaire and Vandamme succeeded in seizing Pratecké výšiny during that morning. They reached the Allied forces rear on their descent from the Heights to the Zlatý potok valley and split their army. This particular manoeuvre has been considered decisive for the final triumph of the French army.

On the Eve of Legendary Battle

Let us travel back in time on the eve of the legendary battle. Napoleon is said to spend it not far from the Žuráň Hill in a road-side inn “Pindulka“ where he ordered his favourite meal – potatoes on onion. The inn derives its name from the original owner Matěj Pindula – a citizen of Brno. Now, the building has been utilized by the South Moravian Road Administration and Maintanance Office and there is no public admission.

Napoleon spent some nights before the battle also in the former road-side inn “Kandia“ not far from the ancient road to Olomouc. He wanted to get good knowledge of the terrain he selected for the future battlefield. He probably spent the night in the house No. 12, the evidence of his stay was to be engraved on the ceiling joist.

Soldiers Did not Have Special Treatment

There is a number of stories on Napoleon´s dining and lodging. Maybe, you would like to know something about common soldiers and their dining and lodging in their camps. As soon as armies set out for military campaigns, soldiers got nothing more but a small financial allowance to buy food. Unlike the Allies, the French army was not accompanied by a number of bakeries and food-wagons and that was also the reason why they were able to transfer so fast.

It was an exceptional case when soldiers were given extra portions of food. On foreign territories they confiscated food from local people. Many other armies often chaotically robbed and wasted what they had, Napoleon on the other hand, had a well-organized system of confiscating stocks. The system was under the control of catering officers who, under death penalty threat, accounted for strict discipline and further re-distribution. The truth is, however, that these strict rules were valid only until the battles started. As soon as they were over, commanders indulged their soldiers much more freedom and looser discipline, usually on behalf of local people.

Battle of Austerlitz Memorial on Žuráň

To be able to absorb the authentic atmosphere of the unforgettable event we recommend a trip to the Žuráň Hill. On its top you can find two maple trees and a granite blockstone with a relief map depicting the battlefield plan with some eliciting details. It contains also the quotation proclaimed by Napoleon when the battle was over:

“Soldiers, My nation will welcome you with open arms. It will be enough to say:
I fought at Austerlitz, in order for
everyone to rejoin: This is a hero!“
Napoleon

The Žuráň Hill is visible from far distance. There is a yellow sign for hikers from Šlapanice and the path leads on to the Santon Hill.