The Santon Hill, a witness of glorious times of Napoleonic era, not only reveals old historical testimonies on the outstanding Battle of the Three Emperors but it is also a place for nature lovers. The hill has advantageous strategic position. Its slopes have revealed a number of archaeological excavations of earlier, medial and later Stone Age periods as well as some other findings from pre-historic and historic times. 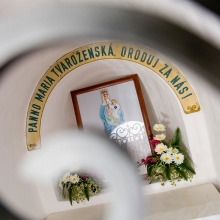 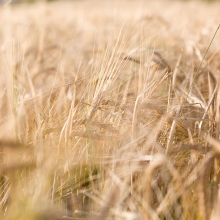 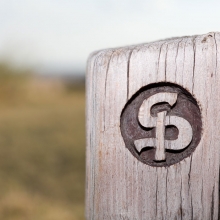 The favourable strategic position had attracted not only our ancestors but also those who came after. Napoleon decided the Santon Hill (originally called Padělek) would guard the left flank of the French army. The 17th Light Infantry Regiment, under the command of General Claparéde, was chosen for its defence. The General not only entrenched the hill in three rows, he also supported it with 18 heavy cannons. It was not an easy task to defend the place and Napoleon himself directly ordered the soldiers to defend it at all costs. The French fullfilled their task and the local land had soaked with blood of fighting enemies.

On the day of the battle two Infantry Divisions of 5th Corps of Marshal Lannes and the Cavalry Corps of Marshal Murat stood firmly on their positions - on the right hand side from General Claparéde. They left their positions after nine in the morning only after they had observed Marshal Soult´s units besieging Pracký kopec on their right. The Russian units under the command of General Bagration are to be observed advancing from Pozořice (Posoritz) Post Station on the far north-west marching in their direction. The General entered the army when he was 17 years old. He is fearless, totally devoted to his service and overlooking any sign of danger. He passed by the Pozořice Post Station, crossed the Pozořice Stream and is about to clash with Lannes´ Corps and French cavalry under the Hill. The Russians make an attempt to avoid the Santon Hill on the right. The French battery welcomes them with massive fire from the trenches. Bagration and his artillery answer the fire. The Russians succeed in besieging Tvarožná for a while, however, soon they are forced to retreat from their positions because of strong artillery cannonade and a counter-attack of 17th Infantry Regiment accompanied by Marshal Lannes´ units. After two in the afternoon, Bagration orders his retreat towards Rousínov.

It was this particular battlefield where French General Roger-Valhubert was severely wounded by a cannon ball during the fight with Russian soldiers. As mentioned above, he died some time later in Brno. A memorial board placed in the centre of the village as well as the Monument of General Roger-Valhubert, that has been placed near the road towards the Santon Hill, commemorate this significant, though stirring past. We can observe a small chapel devoted to Virgin Mary on the hill from far distance. Before the battle French soldiers devastated the chapel and utilized the material for entrenchment. It was built there again in 1832. Local people believe in a legend about the small statuette of Virgin Mary. When destroying the chapel, soldiers wanted to burn the statuette but after the battle was over, local people found it unharmed in ashes. A replica of a French cannon, recalling the period of the outstanding battle, is placed in front of the Municipal Office in Tvarožná. There is a small museum and panorama devoted to the Battle of Austerlitz and it is available for visitors during office hours (or any other prior appointment).

The general public, however, has been well aware of Tvarožná not only because of organizing a number of commemorative events but mostly due to the fact that annual re-enactments of the Battle of Austerlitz take place there. For more than twenty years on the turn of November and December military event and history fans from all over Europe and from the overseas have come here to recall the historic events. They wear authentic replicas of historic uniforms and they perform a certain phase of the battle, though the winner is known in advance. Ignoring the cold weather, the performance has been very popular among visitors and they watch it with great enthusiasm.

Named after Hill in Egypt, St. Anthony or Christmas Crib?

And what is the story of the strange sounding name of the Santon Hill? Apart from “Santon,“ you can come across the name – “Napoleon´s Hill“ - though this is quite rare today. There are legends that it was Napoleon´s soldiers who named it “Santon“ as it reminded them of a hill they came across during their campaigns in Egypt. More probable is the story that “Santon“ is a corruption of the French name of Saint Antoine (St. Anthony). Another story says the name comes from south of France – “Santon“ is a name for a Christmas crib model there decorated with a number of figures of various professions. The local “santons“ have been typical local souvernirs up till now.

If geology is you hobby, you should know the Santon Hill is part of Drahanská vrchovina (the Drahanská Highland) originating in the earlier Palaeozoic era. There are good opportunities for observing its rocky surface on plain slopes in northern and western directions and also on its western and southern wood-covered slopes in lower altitudes. Those interested in botany will not miss the fact that due to favourable geologic and climate conditions, the area is a habitat for mostly thermophilic steppe-flora and other kinds of plants preferring dry and warm climate, many of them protected.