There is 23-metre high sand-stone column towering half-way between Lednice (Eisgrub) and Přítluky. Its pyramid-shape top is ended with a golden star and it is known as “a Slap“ among local people. There have been some stories to explain this peculiar name. Some sources say the column was erected on the place where - Count Alois Joseph I, the estate owner - was slapped by his wife. The stories, however differ in the reasons for doing so – some of them claim her husband gambled off the whole village, others say it was because of his infidelity. 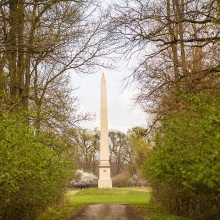 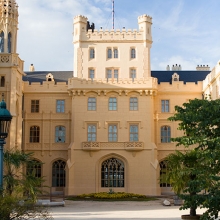 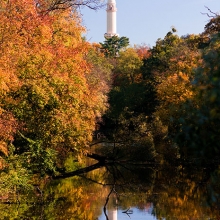 The Cenotaph bears an inscription stating that its construction was initialized by the Peace Treaty of Campo Formio (Italy) concluded between Austria and France eight years before the Battle of Austerlitz. Alois Josef I, brother of Johann I, Prince of Liechtenstein – famous from the Battle of Austerlitz – had the white obelisk of Lednice built in 1798. Being of noble origin he was not obliged to enter the Austrian army, nevertheless he followed his more renowned brother and did so. Due to his poor health condition, he had to leave military service soon and devoted his life to his greatest hobbies – forestry and gardening. He planted a lot of exotic-type trees both for economic and aesthetic reasons and he also laid out the Lednice park in an English style with a range of follies constructed for decoration.

Developing Lednice by the Liechtensteins

The noble Family of Liechtensteins have been closely connected to the history of South Moravia. Lednice passed into their hands in the flow of 14th century and it had been linked to them for more than 600 years. Thus the estate of Lednice became the oldest property under the care of a single family up to 20th century. Every year thousands of tourists come to admire the splendid Romantic castle in Lednice that became a summer residence of the Princes of Lichtenstein. It was built on the original place of a fort and during long eight centuries it had been reconstructed for several times. Its appearance had been influenced by Gothic, Renaissance, Classicism and neo-Gothic styles resulting in its present fairy-tale look.

The Liechtenstein Family belong to the oldest aristocratic dynasty in Central Europe. Their family-tree originated from Henry I who obtained an estate around Mikulov. In those days the Family settled in Moravia and Silesia and they continued in cumulating their property. The Family of Liechtensteins were the wealthiest dynasty in Moravia, huge lands in their possession brought them an enormous source of profit. As a result, they were building splendid residences and developing their estates. They decided to reside in a nearby place called Valtice (Feldsberg) – it will be mentioned in details later on. Among outstanding personalities of the Dynasty is the above mentioned Lieutenant Field Marshal and later General of Cavalry Johann I, Prince of Liechtenstein who, together with his cousin General-Major Morris Liechtenstein, participated in the Battle of Austerlitz. The former ranked among the most esteemed generals and diplomats in Austria and he was respected and appreciated by Napoleon, too. In the years 1805 and 1809 he was accredited by Emperor Francis to carry on armistice negotiations with Napoleon.

The members of the Liechtenstein Family were closely tied to nature. Romantic and picturesque countryside of golden fields, green woods and flowers have been combined up with ponds and a number of magnificient buildings. As a result, the country was called “Lednice and Its Gardens“ or “The Garden of Europe,“ and it was enscribed in the UNESCO World Heritage list in 1996. The Lednice-Valtice Area has been considered the largest man-made landscape complex in Central Europe. The highest extent of the heyday of Lednice has been credited to the Liechtenstein Family – they had been cultivating and improving it for centuries.

The Chateau of Lednice has been surrounded by a magnificient French-style garden characterized by geometric details and regular arrangements passing to a vast English garden. Apart from hundreds of flowers, flower beds, hedges, fountains and statues - there are some smaller pavilions scattered throughout the whole complex. Visitors are recommended to visit the greenhouse of palm trees that is the oldest place of the type in Europe. The greenhouse is almost one hundred metres long and it domiciles plants from sub-tropical, mainly South American regions and it was initiated by Johann I, Prince of Liechtenstein in 19th century. Another attraction of the Lednice Area is an artificial cave “grotta“ situated below the Chateau – you will explore both man-made and natural stalactites and stalagmites brought from the Moravian Karst and models tied to local legends there. In the middle of the Chateau Park there is a pond that had cost a fortune to build. To create it they had to pay about one million gold in coins (it was about ten thousand times more than a rich bride´s dowry). It lasted seven years to give it its present look and 700 people including French captives of Napoleonic wars were engaged in works. The Chateau Pond is just a small part of the pond network in Lednice and its surroundings. The Lednice Garden includes a Minaret, a solitary sixty-metre tower. Local stories denote that craftsmen were afraid of climbing up a spiral-type scaffold that had been used during its construction. It is said that an imperial corporal decided to prove its safety – he successfully climbed it up riding his horse.

War and Besiege of Lednice in 1809

Not only outstanding masterpieces of architecure shaped Lednice – it was the war events, too. On April 10, 1809 the Austrian Army crossed the Inn River, thus starting the Fifth Coalition War against France. Later, battles were transferred to the territory of Moravia – as a result the town was occupied by the Battalion of 13th Light Regiment of Davout´s Army Corps. After signing the armistice he returned to Mikulov, Valtice and Lednice regions and his units were garrisoned there as long as the “Schönbrunn Peace Treaty“ was signed the same year in October.