There are not too many places you can denote to as magic ones but Mikulov (Nikolsburg) in Moravia is one of them. It is situated in the heart of Mikulov wine sub-region – extraordinarily rich and not only in grape-vines. The region is the gate to “the Pálava Protected Landscape Region“ rich in fauna and a number of unique plants typical exclusively for this particular area. The region is part of the Biospheric Protected Area of Lower Moravia that has been included in the UNESCO worldwide network of biospheric protected areas due to its extraordinary nature values. In spite of the fact that Mikulov was not directly involved in the battles with Napoleon, it deserves being listed in the places of interest for tourists. In 1805, one of the Austrian corps on retreat was passing through the town and four years after it was besieged by Napoleon after his victorious Battle of Wagram. 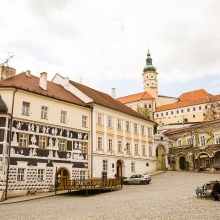 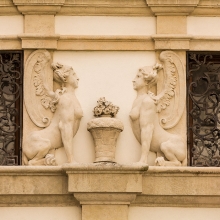 History of the town goes back to 12th century when there was a trading settlement that went on growing fast. Since the middle of 13th century Mikulov and its Chateau belonged to the noble Family of Liechtensteins. Later owners of noble origin were the Dietrichstein Family – they had the Chateau reconstructed in Baroque style. Thanks to the activities of the Olomouc bishop Cardinal Franz von Dietrichstein, one of the most significant politicians of his times in Moravia, Mikulov had been developing as an unofficial capital city of the country.

Armistice Had not Lasted Long

Napoleon stopped for a short visit in the local Chateau on December 12th, 1805 on his way from Brno to Vienna (a salon on the first floor of the Chateau is to commemorate the event). Even though the peace negotiations had been in progress diplomats of both parties were obliged to leave Moravia due to typhoid plague and move to Bratislava (Pressburg).

The long-lasting process of finalizing the peace treaty conditions was completed as late as on December 26th. It was signed in the Archbishop´s Palace (Primaciálny palác) in Bratislava and it has been known as the “Pressburg Peace“ (The Treaty of Pressburg). Aftermath was a complete disaster for Austria – they were obliged to give up Austrian and Italian territories - recognize French territory captured in Italy and cede land to German states (Napoleon´s German allies). They were also obliged to pay 140 million francs in war indemnities.

However, Austria did not want to give up the idea of revenge and there was a good opportunity for doing so in 1809 when France was busy with their military activities in Spain. At the beginning of April they invaded Bavaria, the French ally - thus initiating a war with France. The French were taken by surprise and at the Battle of Aspern-Essling - Napoleon had been defeated for the first time. The following Battle of Wagram brought victory to Napoleon again. The army of the Austrian Empire under the command of Archduke Charles, the younger brother of Emperor Francis I, remained in command of a significant and still cohesive force and decided to retreat to Moravia, where he clashed again with the French and was again defeated, at the Battle of Znojmo (Znaim). The French Corps of Marshal Davout came as far as Mikulov and afterwards they were ordered to join the battle.

Today there is a museum in the castle and it has been unique due to its position – it is towering upon the so called Zámecký kopec (Castle Hill) situated in the middle of the town. Apart from some temporary exhibitions visitors can explore the Dietrichstein Gallery, castle library and a specific viticulture exposition with a huge wine barrel on display. With its volume of 101,400 litres and weighing more than 26 metric tonnes it ranks as the eighth largest barrel in Europe. It is big enough to place the whole castle band inside but a drummer. The impressive chateau park with fascinating details has been reconstructed at the end of the 90s of the last century.

The natural centre of the town acquired its present appearance in the last decades of 16th century when the square was transferred to the close proximity of the chateau entrance. There are a number of marvellous Renaissance buildings, a fountain (with the coat-of-arms of the Dietrichstein Family) and a massive Baroque-style column – the Sculpture of the Holy Trinity. In the lower part of the square there is the funeral chapel and the sepulchre of the Dietrichstein Family. In the nearby Komenského Street you will find the oldest Piarist College with rich decorations in the Church of St. John the Baptist. The Order of Piarists was responsible for founding the first schools and spreading education in town resulting in one of the most important phases in development of Mikulov.
Mikulov has been especially important for the Jewish community – it was established there in 15th century and for 300 years it used to be the seat of the regional Rabbi of Moravia (the Rabbi Löw officiated there in the years 1553-1573). You should not avoid Husova Street (Hus Street), especially the so called Upper Synagogue where there is the Museum of Jewish History and Culture. The Jewish Rabbis rest in peace in the Jewish grave-yard below Kozí vrch (the Goat Hill). With the area of two hectares and 4,000 tomb-stones, it is the second largest one in the Czech Republic.

It requires some physical effort to climb up Svatý kopeček (The Holy Hill/ Tanzberg) but you will be awarded with a wonderful view from its top. “Kopeček,“ as it is called by local people, is dominated by the Chapel of St. Sebastian and it is among the oldest pilgrimage places in Moravia. The way to the top has been lined with Baroque-style calvary. On the right-hand side you will see Kozí vrch (the Goat Hill) with Kozí hrádek (the Goat Tower) – there is a view-tower now. Originally, it was a barbican with embrasures on its walls built in 15th century.

Due to its charming atmosphere, the town of Mikulov has been a favourite destination place for tourists. Apart from wine-related events (e.g. Wine Markets of Mikulov in May, Open Wine Cellar Festival in July, etc.) there is a number of other culture events, for example concerts in the Chateau park or the Mikulov Music Festival in October. A different type of “concert“ has been organized for gourmands offering them local gastronomy specialties