There is an old mill situated on Spálený potok (the Burnt Stream) between Žarošice (Scharoschitz) and Násedlovice (Nasedlowitz) known as “Spáleňák“ (The Burnt Mill) that witnessed another outstanding historical event. The two Emperors - Napoleon and Francis I - met there and under the local lime-tree – ear witness of their dialogue - they agreed upon war armistice and its tough conditions. 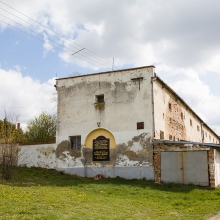 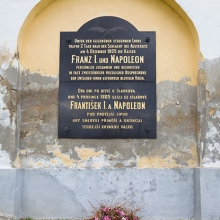 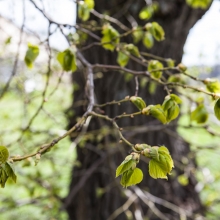 Let us go back to a rainy day of December 4th, 1805. Napoleon was the first one to come. He ordered his soldiers: “Make two fires and put up a tent.“ The Emperor Francis I arrived much later – he was well aware the armistice conditions – a cruel account for the lost battle – would be rather tough. The Emperor of Austria was not accompanied only by his soldiers but also by Johann I, Prince of Liechtenstein. Napoleon walked to welcome him at his carriage and he allegedly delivered the following words: “Your Excellency, you force me to dwell in palaces like this for two months,“ and pointed out at the tent. “It is quite obvious that this type of dwelling suits you perfectly, sir – so there is no reason for you to complain,“ was the reply of Francis I.[15] as confirmed by eye-witnesses. The skinny Habsburg, wearing a long frock coat and a bicorne hat, pronounced the sentence with a smile, however it was very soon replaced by a more concerned expression on his face.

Why Did Emperors Meet under Tree?

The original intention was to meet inside the mill, however unbearable odor and lack of space made the Emperors change their plans and negotiate outside, under the near-by tree-top. Four people participated in the dialogue – Francis I together with the Prince of Liechtenstein on one side and Napoleon and Marshal Berthier on the other one. Both the Emperors were slowly walking round the tree pausing from time to time at fire to get warm. Officers of both sides stand aside at courteous distance from the statesmen around the other fire. “What a pity we can´t hear anything,“ they think. As the officers could not hear too much and the parties involved in the dialogue had not left any written record – we only have partial information on its contents[15]. It is said that during the dialogue both Emperors had been in good mood. To conclude their meeting, Napoleon said: “So, Your Excellency, you promise not to start war with me any more?“ “I swear and I will keep my promise,“ was the reply of Francis I.
Since then local people called the tree – “the Imperial lime-tree.“ Later a place called “Janův dvůr“ (John´s yard) was built near-by with a paved path leading to the tree. Almost one hundred years after the two Emperors´ meeting, they installed a commemorative board on its facade[5].

“Two days after the Battle of Austerlitz,
On the 4th day of December 1805,
The two Emperors - Francis I and Napoleon
Met under the local lime-tree,
To negotiate armistice
And bring the bloody war to end.“

Times were passing by and there was nothing but a dozy trunk left of the tree attracting no attention any more. In 1919, they planted a “younger sister“ of the Imperial lime-tree on the same spot and there has been a high-grown tree now. The legendary meeting point has also been commemorated by a white inscription on a coat-of-arms shaped shield and by an obelisk having been surrounded by four more freshly-planted lime-trees. You should know that part of the original tree trunk has been preserved yet – it is placed in the Chateau of Slavkov and in the Vrbas´ Museum in the Chateau of Ždánice (Steinitz) where one complete wing of the museum has been devoted to Napoleonic times including more than fifty exhibits.

Places around “Spálený mlýn“ Are Attractive for Both Historians and Sportsmen

The surroundings of “Spálený mlýn“ have been attractive even today – you will certainly be fascinated by the nature park Ždánický les (Ždánice Forest) offering wonderful opportunities for trips and hiking. If you wish to explore more of the surroundings you can do so by utilizing a number of bike trails crossing through local vine-yards and wine cellars, flowering meadows and green hillsides. You are free to choose from the wine trails of Moravia, Bzenec (Bisenz), Mutěnice (Mutenitz) or Kyjov (Gaya). It is a challenge for cyclists as it is passing through undulating terrain of Kyjovská pahorkatina (The Kyjov Heights). On the 90 kilometre-long track you will pass steep uphills and downhills in the foothill of the Chřiby Highlands and some hilly parts, too. You will certainly enjoy the magnificient look upon woods, bounds, vine-yards, orchards and fields. One of the most spectacular views is from the stone-made view-tower called “Brdo,“ the highest place of the Chřiby Highlands. The town of Kyjov is situated on the south-east foothill of the Chřiby, dominated by the Renaissance Town Hall. The local Chateau, with sgraffitos decorations by Jan Köhler, was built at about the same period and it houses the local history museum now. The town has been considered the centre of the folk culture of Moravian Slovakia and it is famous for its folk festival called “The Moravian-Slovakian Year in Kyjov“, which takes place every four years. It has had the longest tradition in the Czech Republic and it has been the most significant folk show in the region since 1971. It has always attracted thousands of people to participate and admire the local folk costumes that rank among those with the richest ornaments and embroideries all over Europe.