“Místrodržitelský palác“ (the Governor´s Palace) was originally an Augustinian Monastery. During the reign of Joseph II it was confiscated and it became the Moravian-Silesian centre of the governor. The contemporary governor Count Lažanský left the palace hastily short before the battle. More than a monastery, the palace looks like a splendid feudal manor - in short - an authentic palace. And could there be a more exclusive place for an emperor to be accommodated in? In 1805, Napoleon decided to dwell in the palace and he also based the General Staff of the French army there. Thanks to prior Matheus Pretcher, who had the palace reconstructed in favour of his abbacy candidacy, it resulted in a magnificient Baroque-style palace. The spectacular masterpiece was completed in 1752. And indeed, the same year, Matheus Pretcher was elected
the abbot. 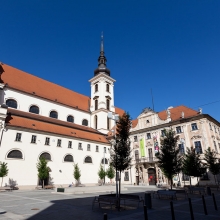 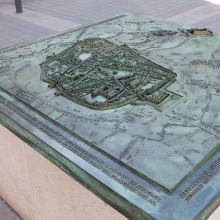 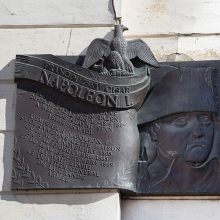 One of the outstanding members of the General Staff dwelling in the palace was Marshal Mortier. If Mortier had taken over his father´s skill, he might have been a wealthy cloths merchant. However, his intentions were different. He was active in politics and later he entered the army. Both his abilities and appearance were excellent. With the height of 195 cm, he was the tallest of all Napoleon´ s marshals. In the army he acquired the nickname “Grand Mortier” (the Great Mortar). By the way, a certain Sergeant Coignet had to face just the opposite problem concerning his height. Even though he did not reach the required 173 cm, he became a grenadier of the Imperial Guard. You may ask how it could have happened – did he have a special privilege? No, not at all. Coignet managed to join the army by a small trick – putting a pack of playing cards into his stockings when passing through military recruitment.

After the first night spent in the Governor´s Palace, Napoleon went on commanding his subordinates. He decided to organize a military parade in the afternoon right in front of the Land House (the present Moravské náměstí - Moravia Square). The parade was conducted in order to boost morale and it was organized every day until the army was definitely transferred to the battlefield. “La Grande Armée” (the Great Army) – was the name given to the Napoleonic troops organized in seven army corps, which were large field units that were capable of independent action until other corps could come to the rescue and its soldiers utilized all types of weapons. Very special component of the army was constituted by major artillery forces under the Emperor´s direct command[1]. When people noticed a shiny uniformed soldier, they immediately recognized him as an Imperial Guard member. It was the most prestigious part of the army and its members disposed of all then known weapons. The Guard included selected soldiers having passed through a number of battles. Apart from wearing higher quality uniforms, they were entitled for certain privileges.

Apart from the Mamluks, the French corps were also composed of some other foreigners, even of some Moravian youngsters. There is, e. g. a story from a small town – Doubravník - to be mentioned. During the French invasion, the Slezák family lodged in a French officer. On the leave, he said the following farewell words to the landlord: “Tak s pánembohem strýčku!“ (“God help you, uncle!”) The landlord´s startled face could not hide his shock – he was unable to puzzle out the soldier´s good knowledge of Czech. Moreover, the officer left a bag of gold coins under the eiderdown in his room. The Slezáks were afraid of being accused of robbery and they went to catch him up. What a shock it was for them when the officer confessed his name was Filip Slezák and he was a distant relative of theirs who had been recruited into the army some years ago. Frankly, neither Czech nor Moravian youngsters were willing to fight on behalf of the Emperor of Austria. Military service was a nightmare for them as it lasted for ages. Since 1802, the situation has slightly improved. Soldiers were recruited “merely” for seven or fourteen years. The above mentioned Filip Slezák later joined the Napoleonic army, however it was dangerous for him to reveal his identity as he might have been accused of having deserted from the Austrian army.

Recalling the French and the Swedes

In fact, Napoleon was dwelling in the Governor´s Palace twice. As you know, first it was in 1805 during the Battle of Austerlitz. Later the Emperor of France returned to the palace in 1809, this time it was during the Battle of Znojmo. Both his stays have been commemorated by a bronze memorial board depicting the imperial eagle and Napoleon´s portrait that has been attached to the palace facade.

Nevertheless, the Napoleonic army was not the only huge army from abroad that marched that far as Brno. There is a bronze model of the city of the year 1645 when the city was besieged by the Swedes. The bronze model has been placed on Moravské Square (Moravia Square) just opposite the Governor´s Palace. The Swedish General Torstenson and his army of 28,000 soldiers had had a much harder task to pass than his French colleague who came here 160 years later. He had to fight hard to conquer the city but he failed. The mere 1,500 city defenders faced a huge Swedish dominance for long-lasting 112 days.

The Governor´s Palace and its reputation do not belong only to the history. Even today it can offer a number of interesting sights. As part of the Moravian Gallery property, you can find there, e.g. a permanent exhibition of ancient art starting from the Gothic period up to 19th century where a number of masterpieces from different parts of Europe can be admired.