18 / Famous Chapel and Legend on Ponds

In the afternoon the French occupied Pratecké návrší and in the central sector of the battlefield the fights were over. Consequently, Napoleon´s troops situated on the Heights started to march south-westwards. At about one in the afternoon, Napoleon met Marshal Soult and his staff not far from the Chapel of St. Anthony of Padua on the hill above Újezd (Augezd) by Brno. And later, in the afternoon, he was watching the Allied troops withdrawal from there. 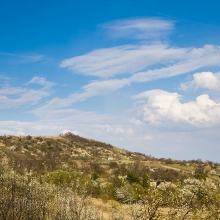 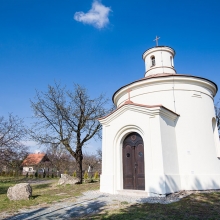 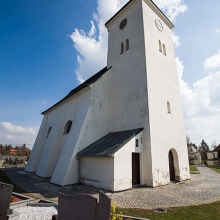 Below the slope, the country flats off in the south and south-west and in times of the Battle it was covered with two huge ponds – Měnínský and Žatčanský. The former, comprising the area of 514 hectares, used to be one of the largest water areas in Moravia. Napoleon could have observed the country far away southwards as well as the three Russian columns in the valley having been pressed by French regiments form two sides[14].
Pratecké návrší rises above Újezd into a place called “Stará hora.” In the afternoon the ridge was flooded with French soldiers. At the end of the battle they start descending – the same act as the Allies were doing in the morning. Now, the Allies have occurred squeezed from all parts - from north - masses of soldiers were rolling – Divisions of Saint-Hilaire and Vandamme, the Dragoon Division of Boyé and six grenadier battalions of Oudinot. From the other side they were opposed by Davout with Friant´s Division from the side of Telnice and Sokolnice. The space for retreat was considerably limited and general panic seized the Allied army. The French were pushing them heavily from both sides. There was a way out further southwards - for those who were strong and happy enough to withdraw. However, an annoying obstacle – the two ponds - crossed their way. In case life is concerned there is usually too little time to consider the best possible solutions. Masses of Allied soldiers were escaping across frozen ponds and French artillery pounded towards the men. The ice was broken due to the bombardment and due to recent couple of warmer days that caused the ice melted. The ice broke under heavy burdens, the men drowned in the viciously cold ponds and several Russian artillery pieces went down along with them. Later the French propaganda and Napoleon exaggerated this incident and toll it cost as a real horror, though the truth was not that tragic. Due to various sources, after the ponds had been drained, there were some tens of dead horses, cannons but only two or three corpses of Russian soldiers. It is also said that the ice broke due to the French cannon shots from the Chapel of St. Anthony of Padua. That may also be strongly doubted as the distance was too long for the French artillery radius. In any case, for the Russians who were in majority at this sector of the battlefield, the end of the battle was an absolute disaster. Small residues of what used to be the Russo-Austrian army were able to escape safe – those not killed, were captured by the French[14]. After four in the afternoon darkness fell over the country and as a curtain it ended this particular act of the Napoleonic wars. “I have seen a number of lost battles but nothing like this,” Russian General Langeron put down in his notes.

Újezd by Brno is situated about south-east of Brno and it is one of the oldest villages of the region. The local quarry on the place called ”Stará hora” provided stone for the Peace Monument. The above mentioned Chapel of St. Anthony of Padua is towering above the village and it has been closely connected to the French as it is believed they used to keep hay there. After the battle, the chapel was deteriorating and finally, in 1814 it was completely destroyed. 49 years later they built its new version on the same place. The initiative was supported also by Louis Adolphe Thiers, a French historian and later President of the Third Republic of France, who came to visit Újezd. The place, where Napoleon was watching the final phase of the clash, has been available even today, however the view has been hindered by overgrown trees and bushes. Unfortunately, the chapel has been situated in the middle of gardeners´ colony. If you move a little farther westwards, there is a good view upon the whole former battlefield area.

From Fishing to Sugar Beet Growing

The village of Žatčany has been situated in the most southern part of the Austerlitz battlefield. Gossips on the fact that victims on the side of the Allied troops were buried on ponds bottoms spread fast among local people and they caused people had refused buying the local fish. Due to it there were heavy economic losses and as a result the ponds had been drained. Their total collapse had been completed during Napoleon´s continental blockade, when Europe boycotted overseas goods import, first of all sugar. It was inevitable to compensate shortage of the commodity and it was one of strong incentives for sugar industry development in the region of South Moravia. Dried up bottoms were convenient for sugar beet and wheat growing[2]. The former pond location has still been evident. You can utilize a bike trail, called “In the Footsteps of Napoleon” that has been passing through and connecting most important battlefield spots. It is 37 km long and both its start and finish are in Šlapanice. You should not omit a former millhouse on the embankment by Žatčany where you can observe five in-built cannon balls in its gable. There is also a church, one of the oldest ones in Moravia, its history dates back to 12th century.