The village of Sokolnice (Sokolnitz) is situated on the right bank of the stream “Zlatý potok,“ about 11 km south-east of Brno. The first written document on its existence goes back to the year 1408 and its history has closely been connected to the Dietrichstein and Mitrovský Families. These two families had been in possession of the Sokolnice Castle, towering above the village, for many generations. Originally, it was a Rennaisance-style fort obtained by the Dietrichstein Family in 1705 for 154,000 coins of gold. The Sokolnice estate was comprised of six villages – Horákov, Kobylnice, Ponětovice, Sokolnice, Telnice and part of Jiříkovice. In the middle of 18th century the original fort had been re-built in a storeyed, three-wing mansion (originally they planned to build a completely new mansion but due to a lack of money, they decided to re-build the original premises). The reconstruction – in French style - was designed by Baroque-style architect Antonín Grimm. The Chateau of Sokolnice has a clock tower ended with a Latin cross and it has become a quite unusual type of construction within the local area. The Castle burnt down during the Battle and since 1843 its last owners of noble origin, the Mitrovský Family of Nemyšl, had it reconstructed in Neo-gothic style. Today the Castle houses a home for senior citizens. 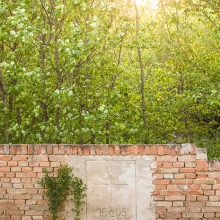 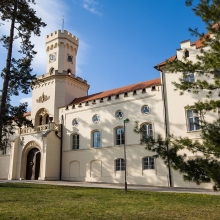 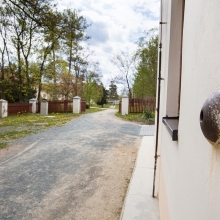 The beautiful manor park together with game-park (pheasantry) have been accessible for visitors. The Zlatý potok (stream) is flowing across and there are some rare wood species growing in the park. If you make an appointment in advance, you are allowed to visit the chapel dedicated to the Raising of the Holy Rood. Paintings on its ceiling are very special, especially corner thumb sketches that are below coat-of-arms and sculpture decorations originating from works of Ignác Langelacher are worth seeing, too. The chapel was consecrated in 1750. The Battle of Austerlitz has been recalled by a French-made cast-iron grenade that has been built-in to the former hunters´ lodge wall belonging to the Chateau.
The nearby pheasantry (a circumvallated park in the valley of Zlatý potok that is flowing across), or rather its wall has been a subject of passionate disputes of many historians. Strong doubts have been expressed on the fact whether the firing positions of the five French cannons have been marked correctly on the wall. And concerning the age of the walls there are disagreements, too – according to some sources they are from the second half of 19th century and it means during the Battle of Austerlitz they had not been there, yet. There are no reliable documents available that would prove the fact that the French would have ever placed any cannons in the area. If the cannons had fired against a slope that would have certainly decreased the efficiency of the target area. Moreover it would have been an extraordinary inconvenient position for the French – if enemies had been on the height opposite the pheasantry, they would have had an open view upon them. On the other hand, how could infantry-men, without any artillery support, have been able to face as many as 30,000 Allied soldiers descending Pratecké návrší? Five signs (or crosses) on the perimeter wall of the pheasantry mark the original location where five French cannons were supposed to stand.

Soldiers Are Made by Uniforms They Wear

The truth is that Sokolnice witnessed fierce battles. You may ask how particular army members differed from each other. What were the distinguishing signs among particular uniforms? We are going to give some details on French, Russian and Austrian uniforms in particular. The French wore blue uniforms, The Russians were in green ones and the Austrians had white uniforms. There were not only differences among armies, there were also contrasts according to their positions within particular armies. Infantry, artillery or cuirassiers – they all were wearing specific types of uniforms. All the three armies that were fighting in the Battle of Austerlitz have surmounted a number of changes and these were reflected also in uniform amendments. New types of uniforms and head-gears belonging to them have been introduced. It is quite interesting, however, that the French army has not quit the typical plait – compared to the armies of Austria and later also that of Russia who had done so. The French Imperial Guard strictly insisted on wearing plaits.

We recommend to stop for a while on the road from Prace to Sokolnice, on the way from the Peace Monument, and take a look around the countryside. You will see the south-western part of the battlefield in front of you where the Armies were fighting all day long. Part of Soult´s Army Corps was ordered to keep the enemy within the territory between Kobylnice and Telnice until 3rd Corp of Marshal Davout would arrive.

In the middle of the village there is a romantic pond with a small island in it. Those who are interested can go in for sporting or relaxing forms of angling on a number of other water areas within the surroundings. North-west of the village is a protected area “Bottom land in the valley of the Dunávka River”. It is a unique place called “Žabárník“ - a habitat of endangered species of birds, amphibians, reptiles and many other animals. The region has been encompassed in the “Cezava“ micro-region, involving five more villages (Kobylnice, Sokolnice, Telnice, Žatčany and Újezd by Brno). Apart from natural beauties, the territory includes a number of historical and religious-type monuments.