Merciless foodstuff confiscation burdened also the estates north of Brno as well as the areas of the Moravian Karst – before the battle and after it was over, too. Villages of – Boskovice (Boskowitz), Borotín, Jevíčko (Gewitch), Letovice (Letowitz), Tišňov (Tischnowitz), Rájec and Černá Hora – they all have witnessed the three armies´ lodgings, though not in such an extent as those places situated closer to the battlefields. Thousands of loaves of bread, legume, flour, oats, beer, fat and a number of other articles were to be delivered not only to the French but also to the Allied Army. 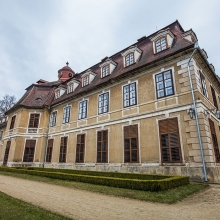 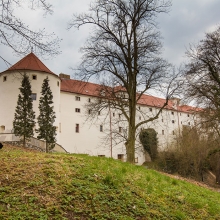 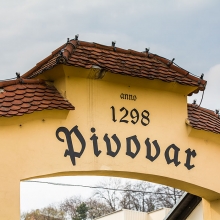 Local chronicles have recorded the following facts: “French wars yoked our village hard and high prices and poverty made our lives even worse. And all this had been topped off by the French army that flooded our regions,“ as written by Petr Svoboda, the Tišňov village chronicler.

After the ferocious battle was over, soldiers organized hospitals for the wounded at any place available. In the village of Černá Hora (Black Mountain), medical treatment was provided in a house called “Špitálka“ – a place where they had treated the local poor for many years. “It was probably the Austrian wounded and ill soldiers and perhaps also the Russians who were treated here as the general hospital for the French army was mostly focused in Brno and its surroundings. Many of the wounded soldiers died here. They were buried not far from the Column of the Crucifixion that was situated there,“ as described by the local author Josef Pilnáček. The original Column had to give way to a new road construction but its true model is to be found just a couple of metres away.

During the battle of the Three Emperors local people were obliged to consign also casks of wine and it is very probable that beer, too. The village of Černá Hora has been closely tied to brewing – there is the oldest continuously running brewery in Moravia. The first direct document on its existence is of the year 1530. If you are interested, there is 60-minute guided tour through the brewery available with beer tasting at the end. There are some other sights of interest, e.g. the school building designed by Bohuslav Fuchs, a renowned Czech architect, or a chateau in neo-Renaissance style where some outstanding events took place in the past. Unfortunately, the chateau has not been available for the general public.

In July 1866, during the Prussian-Austrian wars negotiations on further development in Europe were carried on there. France was represented by Vincent, the Count Benedetti, the envoy of Napoleon III (nephew of Napoleon I). He met von Moltke - the Commander of the Prussian Army, and the Minister of Prussia - Otto von Bismarck. This man, who was one of the most influential politicians of 19th century, became the first Prime Minister of Prussia and the first ever in the Council of Imperial Chancellors. Apart from that, Bismarck has been distinguished for his efforts of constituting united Germany and for his rigorous approach to the way of solving political problems, that resulted in his nickname “an Iron Chancellor.“

Campaigns of Napoleon had hard impacts upon the estate of Rájec, too. Local people were obliged to consign lots of foodstuff for military granaries in Brno. The local Chateau in Rococo-Classicistic style has had close connections to France – there are hundreds of paintings by Baroque and Romantic-style artists there. The Romantic-style masterpieces on the show were created to confirm their patriotic character as a result to similar trends in England and France but they also presented very up-to-date reactions on threatened positions of the Habsburg monarchy during the wars with Napoleon. The chateau can boast of a unique treasure - a library containing 60,000 volumes of books – comprising the largest chateau-type library in the Czech Republic. It contains the original edition of the Great French Encyclopaedia by d´Alambert and Diderot. The French-style chateau park is also worth seeing as you can observe perfectly mown lawns and masterly cut bushes there. Apart from the treasures of architecture, the village of Rájec-Jestřebí has been closely linked to the aristocratic Salm-Reifferscheidt-Raitz Family. The founder of the Moravian branch of the Salm Family was Antonín Karel Salm-Reifferscheidt who had purchased the estate of Rájec in 1763. Apart from the estates of Rájec and Blansko, he was in possession of an old dynasty dominium in the Ardennes, later lost by his descendants. And what is all this to do with Napoleon? It was exactly him who confiscated their property. All over his life-time Antonín Karel Salm-Reifferscheidt had been in service of the Imperial Court. Due to his excellent education, he was a tutor of Joseph II and he was also a chamberlain-in-chief of Maria-Theresa.

The town of Rájec-Jestřebí has been denoted to as the Northern Gate to the Moravian Karst – one of the most important karst regions in Europe. Incredible local beauties of nature attract visitors for hiking and exploring them, out of which “Sloupsko-šošůvské jeskyně“ (Sloup-Šošůvka Caves) deserve special attention. They are made of huge corridors and underground gorges. Some other places as Balcarka Cave have rich and colourful stalactic decorations, Kateřinská Cave (Catherine´s Cave) is renowned for its unique limestone columns and in Punkevní Cave (Punkva Cave) there is an underground river. Do not miss a visit of the nearby famous Macocha Abyss reaching the depth of 138.4 m.