Important towns used to be connected through post routes with relay stations having been situated every two Vienna miles (i.e. about 15 kilometres). Thanks to this system, the couriers were able to meet settled transport speed. Since 1785, one of these stations was situated on the imperial road between Brno and Olomouc, not far from Pozořice and Kovalovice. Later the post station had been transferred to Pozořice and the original one was denoted to as “the Old Post Station” (Stará pošta). Before the Battle of Austerlitz, the place was utilized by French Marshal Murat as his headquartes. Later it was in hands of Prince Bagration who started his attack on the Santon Hill from there. And later, his retreat had been backed by Austrian artillerists from their positions not far from that place. And Napoleon himself considered the Old Post Station as a key point. Accompanied by his marshals he had led one of major meetings there before the battle started. 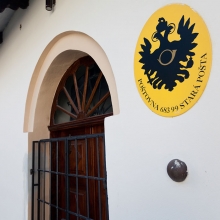 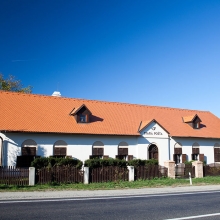 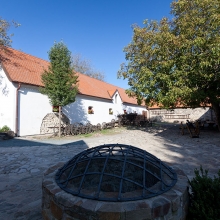 It is said Napoleon´s subordinates had had a harsh dispute even before their meeting started. Marshals Murat and Soult wanted to persuade Marshal Lannes, who belonged to Napoleon´s closest commanders, to persuade the Emperor to retreat. Lannes, though being strongly against their proposal, agrees and he prepares a personal letter for the Emperor. Before he could finish it, Napoleon appears in the Old Post Station and after reading the letter, he admits the following: “Does Marshal Lannes intend to retreat?” The answer comes from the side of Soult: “Excellency, the Fourth Corps will be able to double its power.” Lannes is persuaded that Soult plays games to blame him of being a coward and to show off in Napoleon´s eyes. He bursts out in anger, calls Soult “a loser” and continues as follows: “These two persuaded me to write the letter.” Napoleon ignores their quarrel, as in the meantime Lannes is insulting Soult and tends to provoke him to meet in a duel. In the end, Napoleon agrees with Lannes and orders the French army to retreat towards Brno.

Prince, Diplomat, and Herald of Peace – Johann I of Liechtenstein

Johann I, Prince of Liechtenstein, Commander of the Allied Russian-Austrian cavalry, was probably the only one among the Allied troop members who was perfectly familiar with local terrains, as he was the owner of the Pozořice estate. His cousin, Johann Baptist Joseph Morris of Liechtenstein, also took part in the battle. He was a commander of the combined cavalry brigade in the Corps of General Buxhöwden, who was known for his absolute enthusiasm for fighting and he never fell in panic whatever may have happened during fights. During the Battle of Austerlitz, however, the General is believed to command his soldiers in less than sober state. Unlike his cousin, Morris was fighting on the left flank of the Allied troops. Nevertheless, he too, was unable to avert the Alliance´s defeat. The Emperor of Austria Francis I delegated Johann I, Prince of Liechtenstein to Napoleon to offer the Allied troops´ capitulations. And may you ask why it was Johann I, Prince of Liechtenstein who headed to meet Napoleon in Pozořice Old Post Station - certainly not because he would be the only one to find his way there. He was an excellent diplomat, one of the very few among Austrian generals having been respected by Napoleon himself. Napoleon arrived in the Old Post Station in Pozořice when the battle was over. The day was almost dawning when the contented Emperor lay down and fell asleep. However, he was not allowed to have a long rest. His aide started to wake him up saying the following: “The Prince of Liechtenstein is approaching.” Napoleon let the Austrian diplomat speak and accepted his capitulations. “Your Excellency, there is nothing left to be seized,” Liechtenstein said. “The Battle has been completed so perfectly - there is nothing else to be added to its glory but peace.”

The Old Post Station reveals deep wine cellars underneath. It is said the French celebrated their victory there. The Old Post Station and its close surroundings provide a number of opportunities to recall the Austerlitz clash where not only people lost their lives. The common misfortune of thousands of dead soldiers and their horses has been commemorated by a life-size statue – depicting a bullet-hit stallion. The statue has been placed in the middle of fields behind the Old Post Station, not far from a car park. Thousands of dead horses had left a number of traces behind – people came across horseshoes, or horse equipment components. Not far from the Old Post Station, on the way towards Rousínov, we can find another memorial - devoted to the memory of two Austrian artillery batteries under the command of Major Václav Jan Frierenberg who warded off General Bagration´s column retreat at the final stage of the Battle of Austerlitz.

You can experience the real atmosphere of Napoleonic times right in the premises of the Old Post Station that turned into a stylish restaurant with accommodation facilities. You can, e.g. book in advance a guide wearing a replica of an imperial grenadier uniform. On the spot you can visit horse stables or a small Napoleonic museum. Some authentic artifacts linked to the battle are on the show as well. All your senses are exposed to perceive the genius loci of the place. The local restaurant menu includes specialties of the Czech and Moravian cuisines but you can also taste dishes preferrred by Napoleon, like - “Chicken a la Marengo” - the recipe comes from the Emperor´s personal cook called Dunan. Another specialty is called “Santon Cannon Ball” (minced meat in bread) served with a wooden spoon – you can keep it as a souvenir. The two above mentioned dishes are not included in the standard menu, however there is no problem to order them in advance. By the way, speaking about meals, did you know that semi-processed soups were developed by Proust and Parmentier – two French chemists living during the era of Napoleon? They evaporated the broth to get a syrup, poured it in patty-pans and left it to gel and finally dry. These dried cubes were dissolved in boiling water and they were utilized mostly in naval and military canteens.

The Old Post Station provides the opportunity to spend a night there as Napoleon did. A trip to an open-air swimming-pool in nearby Kovalovice may be a good idea for entertainment or active relax. There are historical buildings that used to be in property of the Liechtenstein family – the former curia domini, fortress and prison - have been deprived of their original functions. They have been reconstructed and completed and today they are utilized as a house of culture, municipal office, library and restaurant.