The village of Holubice (Holubitz) is situated about 5 km north-west of Austerlitz. Off north is the part of Holubice called Kruh (Kruch) – originally called Tři dvory (Three Yards) that shared its autonomy with Holubice. At the end of 1970s, during the D1 motorway construction, a burial place of the second half of 10th century had been disclosed in its surroundings. The burial place included the most ancient coins of Hungarian Kings and the Přemyslid Dynasty, thus shifting Holubice among most significant archaeological sites in the territory of Moravia. 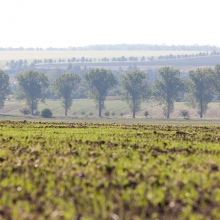 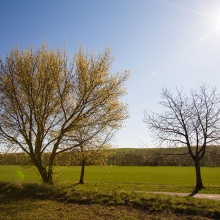 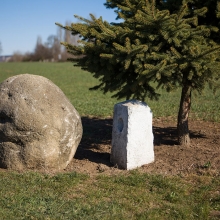 On the eve before the Battle of Austerlitz, the Allied troops (about 85,000 men) occupied positions following the line from Pozořice, Holubice, Prace (Pratze) up to Újezd (Augezd) by Brno. During the battle both Holubice and Kruh witnessed heavy cavalry clashes. The 5th French Corps supported by General Murat´s cavalry marched on towards Holubice and pushed the Allies towards Rousínov. Last but not least – on the side of the Alliance the Russian Imperial Guard was held in reserve. It constituted an elite unit of the top of the Russian high society involving about 10,000 men. The unit was under the command of Grand Duke Constantine, the younger brother of the Russian Tzar Alexander. He must have been really shocked by the situation he had rushed into – the Guard was supposed to be in reserve for progressing Allied columns – instead they occurred in the front line, furthermore they had been attacked by Marshal Lannes units near Blažovice (Blazowitz) and they had to defend themselves. Lannes was a very capable tactician, he had a good flair for fight and last but not least – he was very popular among his soldiers.

The Russian Guard Cavalry makes an attempt to reverse the situation – in the meantime its right flank has been backed by cavalry column headed by Prince of Liechtenstein. The Russian Guard Cavalry attacks the centre of Vandamme´s division. Napoleon has already left his position on Žuráň and transferred to “Staré vinohrady” (Old Vine-yards Hill) and together with his Imperial Guard he is thoroughly watching the course of the battle. It is almost twelve at noon. Two French regiments fight hopelessly with the Russian Guard Cavalry. Sensing trouble, Napoleon orders part of his Imperial Guard - the Mounted Grenadiers and Mounted Jaegers with the famous Mamluks forward to help them. They are stopped for a while by grape-shots of Russian cannons (such type of bullets consisted of board cover filled with small iron balls – when shot, the cover fell to pieces and the contents turned into lethal shower). Nevertheless, some of the cavalrymen manage to intrude into the Russian formation – they soon have to retreat though.

Colonel Morland, the Commander of the attack, failed and lost his life inside the Russian formation. Napoleon orders his aide, General Rapp to lead the next attack of the Jaeger Cavalry – this time the French were more successful and the Russian Guard is forced to retreat – leaving hundreds of dead and wounded behind. The combat between the two elite units could not have significantly influenced course of the battle, nevertheless, it became immortal and entered the history – not only because it was a duel of elite units on both sides but also because it proved another evidence of efficiency and harmony as specific components of the French Army.

Major problem of the Allied army was its command - it was unable to function as an organic unit, nor could it utilize landscape advantages. The Army performed complicated manoeuvre operations and, in general, it executed in a very awkward manner. The language barrier was another handicap – a number of Allied commanders failed to receive orders and proper information in time as there was not enough time to translate them. They only could have relied on their own skills and adjust their commands following their former military experience and instincts.

On the other side, the French Army was in favour of a number of indisputable advantages. First of all, the French introduced modern fighting methods – it was just a couple of years after the French revolution and its spirit and enthusiasm have still survived among soldiers. Moreover, France had already introduced compulsory military service, i.e. each of the French soldiers was in fact an armed citizen.

The new French revolutionary army had also substituted the outdated elements of linear tactics by new tactics of free formations. Napoleon followed the innovations and he contributed by adding some new tactical and organizational elements. An important role was to be played by artillery focused into large formations and applied in bulk volumes. The French Army counted half a million men, and in those days it was the second largest army after the Russian troops. There were many young recruits among them who passed only a basic military drill and during fights they often followed their basic instincts.

Their reactions in combination with enthusiasm, revolutionary spirit and their inentions to fall for their homeland, were often puzzling for their enemies. During fights they were able to create mobile and very flexible formations. In the French Army the military career was conditioned by merit, by proving one´s capabilites, while in the Allied troops the chief commading posts were accessible exclusively to aristorcracy.

From Gigantic Soldiers to Granite Monument

You will find a mixing plant in the place where the Russian Guard Cavalry used to line up and it is impossible to miss it. Its industrial look coincides with the genius loci expressed by three gigantic figures of soldiers and a cannon. If you pass on the motorway southwards to Holubice, you will see the clash point westwards and even farther Žuráň and Santon in the same direction. If you decide to continue the other way round (leftwards from underpass), you will reach a place called “Valše“ - a former water mill between Holubice and Křenovice (Krzenowitz) on the Rakovec Stream. Grand Duke Constantine´s uhlans had been pushed that far. The military event has been commemorated by a granite monument above the village on the right-hand side of the connecting way to the main road towards Olomouc.

Every year, one week before the battle anniversary, the local authorities organize a march to the Memorial of the Battle of Austerlitz victims. The event is especially attractive for children who are equipped with different sorts of lanterns.