The anciet episcopal town of Vyškov (Wischau) is situated on the upper flow of the River Haná, about 40 km north-east of Brno. The history of Vyškov goes back to 12th century, due to its suitable position on trading crossroads from Brno to Olomouc and Kroměříž (Kremsier). On the other side, its strategic location increased risks of potential attacks during war times. The town was plundered by the Hussites and during the Thirty-Year-War it was twice besieged by the Swedes. The town saw its largest economic flourishment in 17th century. The then Bishop Karl II von Liechtenstein-Kastelkorn had a huge wing with rich gallery added to the Chateau. 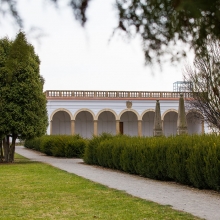 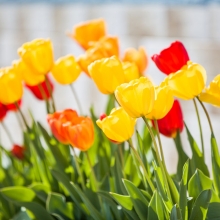 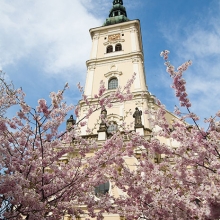 The Chateau together with the Church of the Assumption of Virgin Mary and the Rennaisance Town Hall have created the typical skyline of the town. The Bishop had the marvellous chateau garden increased. In those times Vyškov acquired the name “Versailles of Moravia.“ It is believed that the famous gardens of Kroměříž, that are on the UNESCO world heritage list, had been inspired by the local chateau garden. The outstanding period of the town history was cut by the fire in 1753. The Chateau was reconstructed but it has never reached its former status. Today, there is a museum involving eight permanent expositions, e.g. it contains a large collection of Vyškov folk ceramics, the manufacturing of which goes back to 18th century. You will also learn a lot of interesting information on Alois Musil, one of the most distinguished experts on Arabic and Oriental cultures on the turn of 19th and 20th centuries, who is a native of Rychtářov (today part of Vyškov). He has been renowned for exploring a desert castle in Kusejr Amra on the present territory of Jordan. He was a Catholic priest and scientist commanding some Arabic dialects and as an Austrian spy and military agent he was involved in the war affairs in the Near East during the World War I. He was a cousin of Robert Musil – a famous Austrian writer. Musil described his rich experience from the Near and Middle East in adventurous novels taking place in Arabic world. If you love reading - it is a good chance to borrow his books from the local library.

The French army intruded into Vyškov on November 21st, 1805 and Napoleon Bonaparte arrived at the Chateau the same day. He wanted to meet his generals – Treilhard and Milhaud there. He was carefully inspecting the terrain on his way to Vyškov. One day before his arrival, the Russian army of General Kutuzov had left the town towards Olomouc - he had planned to join the units led by Emperor Francis and Tzar Alexander in order to form the Allied Russo-Austrian Army.

However, not too much time after, the troops switched their positions again. On November 25th, there was an attempt on the side of 5,000 Russian Cossacks to conquer the town. The French sustained and stayed there until November 29th, however after fierce clashes it was besieged by the Allied troops again. It is said that after the so called “Vyškov Scuffle,“ horse hoofs tread down the surrounding fields so much that the following season seed corn was unable to break the crust.

Short time afterwards the Allied troops organized a meeting in the Chateau premises. Both, Russian Tzar Alexander and the Emperor of Austria took part in it. They both spent a night there, too.

Real historical events concerning the Battle of Austerlitz, including the two Emperors meeting in Vyškov create a realistic background of the world-known novel by Leo Tolstoy – “War and Peace.“ The State Library Archives in Moscow also deposit a painting – “Tzar Alexander in Vyškov after the French Retreat on November 28th, 1805.“

The historical events have also been reflected in a number of folk songs. One of them is tied to Vyškov and it recalls the places where troops were passing by:

“Not far from Prostějov and Vyškov,
My horse lost its shoe.
Oh, please shoe it back again, my farrier,
My horse does not suit a Hussar.“ [7]

Every year in November and December there are regular commemorative events to recall the Battle of the Three Emperors in Vyškov. Soldiers wear replicas of historical uniforms and some of them take part in marches lasting a couple of days. They follow the original battle route and in some villages and towns they re-enact clashes similar to those that occurred in 1805.

At the end of 19th century, a neo-Romanic synagogue was built on the south-eastern part of the Masaryk Square in Vyškov (in those days there were a couple of Jewish families living in Vyškov, constituting about 5% of the total population). Its location, on the main square, has been quite unique. There is a Jewish cemetery in about
1.5 km eastwards of the synagogue.

Another point of interest is that 17th Meridian of Eastern Longitude runs through Vyškov. There is a board denoting the exact spot placed in the Masaryk Square pavement. The Square itself is rather unique due to its triangel shape and especially well observed from the Town Hall Tower.

The town itself has preserved its military environment. Since 1936 there is a military garrison that has constantly been increasing its prestigious position as the most important training centre for the Czech professional army staff members constituting an integral component of the University of Defence in Brno. There is a good opportunity to observe some air bombers, reconnaissance airplanes or some other military equipment in the Vyškov Air Museum (situated in the local airport area).

There is a ZOO, situated in about ten-minute walking distance form coach and railway stations, not too far from the town centre. The ZOO park has been placed on the area of 4 hectares and all visitors can explore a number of domestic and farm animals from all over the world. Another popular attraction is the unique “Dinopark,“ with plenty of life-size models of pre-historic animals, as well as a 3D cinema hall within its environment.

The Vyškov region contains a number of unique objects of history - rests of fortified hill-forts, castles, small chapels and objects of folk architecture, e.g. thatch-roofed cottages in the villages of Ježkovice (Jeschkowitz) and Ruprechtov. A former stone-quarry has been turned into an outdoor swimming-pool in the village of Luleč. Some other places of interest are, e.g. a nature park called “Říčky“ and a picturesque Rakovecké údolí (Rakovec Valley). North-east of Vyškov unfolds the miscellaneous landscape of Melicko region. Apart from dense woods and a Medieval castle rests, you can explore ruins of a 12th century Romanic rotunda devoted to St. Pantaleon, the Patron of physicians.