22 / Rare Guests in Chateau of Bohdalice

Bohdalice (Bochdalicz), a small Moravian village situated not far from Vyškov, has been renowned due to its history. Shortly before the Battle of Austerlitz, on 29th day of November, 1805 - two distinguished personalities spent a night there – Russian Tzar Alexander and Francis, the Emperor of Austria - both on their way to Vyškov. They took advantage of the hospitality of the local Chateau that belonged to the aristocratic Family of Manners. Wolfgang Manner – brother of the then owner of the estate – was responsible for supplying the Allied troops with foodstuff during their stay on the territories of Moravia and Silesia. 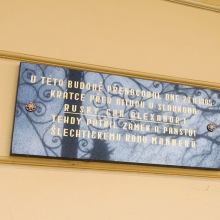 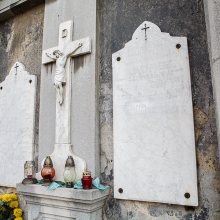 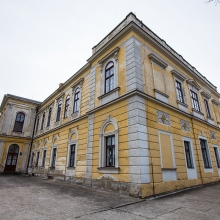 Arrival of Statesmen was in Friendly Atmosphere

Neither Tzar Alexander nor Emperor Francis have arrived alone. They were followed by their troops that went on occupying the areas of neighbouring villages causing lots of troubles to local people. The arrival of the Tzar has been recorded in the local sources as follows:

“Alexander has arrived on time, accompanied by the Guard of Cossacks. He immediately checked his perfectly mustered army – all of them were like marble-hewn. After the soldiers saluted their Tzar, they fired a rifle-shot to his tribute. Alexander was pleased and he was keeping his good mood all the time. With a proud expression on his face he addressed his soldiers encouraging them that they would certainly defeat their tiny little rival.“

A board on the left-hand side of the Chateau entrance is to commemorate the Russian Tzar and his visit.

From Convent of Jesuits to Manner Dynasty

And now let us go back to the Bohdalice Chateau history. The very beginning of the village has been tied to the Jesuits who had purchased the village in 17th century. In the place of the Castle there was nothing but a farm-stead and a fort there. Within a century or so the construction had acquired new shapes. The Jesuits had re-built the fort and turned it in a Renaissance residence. In 1783, an aristocrat and knight – Raimund Manner, who was an imperial official in Vienna, purchased both the castle and the estate. Apart from his official activities, he was keen on fruit tree and vine-yard growing. He developed these activities and behind the castle he grounded an orchard and a vine-yard. The Manner Family had been in possession of the Castle until the end of the World War II, when all their properties were confiscated. Later a school was established there and it has survived up till now. The young children of pre-school and school-age may feel as “living in castle.“ The former Castle Hall has been utilized not only for school festivities but it is also a wedding hall. The Castle premises have not been available for visitors.

Church of Assumption of Virgin Mary Cloaked in History

The village of Bohdalice offers a number of other sights to be explored, e.g. the Church of the Assumption of Virgin Mary that was built on the foundations of a former wooden church in the years 1807-1814. It was Johann Manner – son of a Bohdalice merchant Raimund Manner – who initiated the construction. Art-lovers would immediately recognize that the church was built in Classicistic style with some late Baroque features. In the burial place there is the Manner Family Sepulchre. All the family members buried there have been listed on two steles placed on the rear wall of the church. Some other places of interest include the Baroque Statue of St. Jan Nepomucký (St. John of Nepomuk) of the beginning of 18th century and a stone-made crucifix of the year 1845. If you decide to visit these places you should not miss the so called “Crucifix of Constantine and Methodius“ – an ancient stone-made cross that has been situated in the midst of fields out of the village – as a symbol of reconciliation it has been there for centuries. It is believed that it was built to commemorate the two missionaries Constantine and Methodius who came to introduce Christianity and ancient Slavic alphabet in Moravia. Due to a legend there used to stand an old lime-tree with a sacrificial place. As they were passing by, they had ordered to cut the tree and had a crucifix built there - as a symbol for taking up Christianity. There is a way to the Crucifix from the Chateau towards the church. As soon as you reach it you keep on walking until you come to the end of the village and you go on towards the village of Kučerov (Kutscherau) – there is a place called “Piskál.“ In summer time when fields are covered with crops you may easily fail in finding it as it is right in the middle of fields facing the place called “Větrníky.“ There is a peculiarity concerning reconciliation crucifixes and stones in general - their origin has been tied to criminal acts – they used to be built by criminals as a sort of purgatory for their delicts.

The Museum of E. Müller in Bohdalice is another place where history can be explored. It is open every Sunday from 1 p.m. to 5 p.m. or at any prior arrangement. Once in two years local people organize there the so called Tzarist Festivities – in cooperation with military history clubs. They re-enact the historical events of those days taking place in Bohdalice – the unique fact of the two Emperors´ stay but also war events taking place in the region - more than 200 years ago. During the festivities visitors, both children and adults, can explore a military camp but also some combat shows or
a parade of historical uniforms.