Day One: From Mikulov do Drnholec
point in the map

7 / Around Znojmo and Mikulov by Bike

Day Two: Following the Traces of the Battle of Znojmo 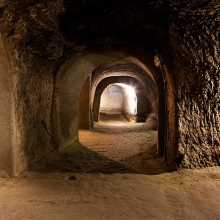 Go for a trip to Dobšice, it is only a couple of kilometres off Znojmo. In July they organize a festival “Conquering Dobšice Wine Cellars“ and it is connected with re-enactments of Napoleon´s fights there at the Battle of Znojmo in 1809. Wine tasting is available all year round. The local rosé wine has been renowned. A monument recalling Napoleon and historical events tied to him are placed in the village centre. Passing by the River Dyje you will get to the village of the same name. When you reach the crossing with the local road No. 408, turn left towards Suchohrdly – you can visit the place where the original, so called Napoleon´s oak-tree used to grow and where from Napoleon commanded the Battle of Znojmo. Now a much younger oak-tree has been planted there. And on the farm “Červený dvůr“ (the Red Yard) Napoleon accepted the Austrian armistice proposal even against strong disapproval of his own marshals – thus bringing the Battle of Znojmo to its end. The farm has been a private estate and you will find it not far from the crossroads in direction towards Kuchařovice. There is an info board, reminding of the historical events. And we move on towards the villages of Kuchařovice and Přímětice. In the latter village there is a unique cross-shaped wine cellar and a Memorial of Prokop Diviš with his famous lightning conductor. From there you can return to the starting point – the city of Znojmo where you can explore some places linked with Napoleon, too, e.g. Daunův Palace on Masaryk Square or Loucký monastery, to mention just a few.

Day One: From Mikulov do Drnholec